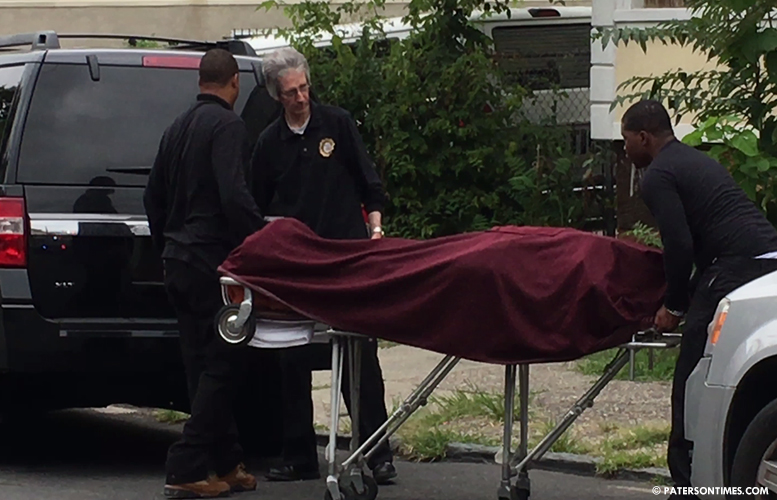 The dead body of an unidentified man was discovered inside an abandoned Godwin Avenue house on Saturday morning.

Police were called to 75 Godwin Avenue at about 9:45 a.m. to discover the dead body on the second floor of the building. Officials from the Medical Examiner’s Office were observed carting the body to a vehicle for transportation.

Sally Cooke of the Medical Examiner’s Office at the scene said the body was that of a white male. She said the medical examiner will have to identify the individual and determine the cause of death.

Cooke would not say the estimated age of the dead person or the condition. When asked about the condition of the body she pointed to the half-boarded-up structure and said “it’s an abandoned building, [you] can imagine.”

The house where the body was discovered is a known drug den, said two neighborhood residents.

“This is the second body in this house. They set the house on fire four times,” said a woman, who did not wish to be identified. “They are in and out like it’s the New York train station. [They] stay in there, shoot up in there, every day — they have been doing this for years.”

The woman’s claim that this was the second body or that the house has had four fires could not be verified. She said the abandoned buildings at 75 and 73 Godwin Avenue have been stripped of metals and what remains are just two shells that ought to be demolished.

“We’re sick and tired of them two houses in this neighborhood. We want them down,” said the woman. She said users shoot up drugs at all hours of the day and night at the two houses.

“I can stare through my window every night and see six, seven heads coming through to do drugs. I tell them, ‘Go home! I’m going to call the cops.’ It doesn’t make sense to tell them because they are still going to be over there,” said a second frustrated neighborhood resident. She too wants both structures torn down.

Council president Ruby Cotton, who represents the 4th Ward, where the houses are located, said neighborhood residents have been complaining about drug use at the abandoned buildings.

“I’ve called police many times to chase people out of there,” said Cotton. The city has been struggling with large number of vacant and abandoned buildings. Mayor Jose “Joey” Torres’ administration has reduced the number to under a thousand – at one time the city had well in excess of a thousand.

The council president was at the scene with her colleague council vice president Luis Velez on Saturday.

“We lost a life in there,” said Velez. He urged residents to call police when they see abnormal activities in their neighborhoods.

“When it’s not fire. It’s something else,” said the second woman. “They need to go. It’s too much.”

Paterson has been described as a regional hub for heroin that attracts buyers from far and wide. “People are just coming in looking for drugs,” said Cotton. She said president Donald Trump’s administration needs to do something about the opioid epidemic.

“It’s really destroying neighborhoods. Even though we had abandoned houses, we never had the problems we’re having now,” said Cotton.