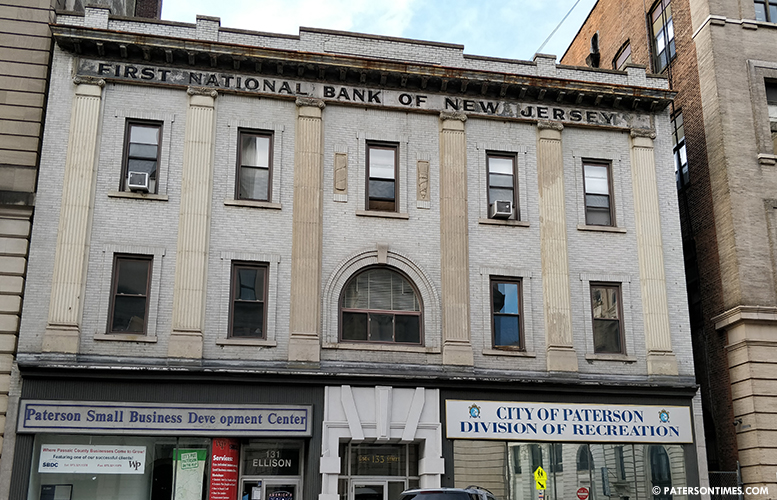 The downtown Paterson office building that presently houses the Division of Recreation and the Small Business Development Center is being eyed for residential conversion.

Mayor Jose “Joey” Torres’ administration submitted a redevelopment plan to the city council to turn the three-story, city-owned building – once home to the First National Bank of New Jersey – into market-rate apartment housing.

Council members granted preliminary approval to the plan on Tuesday evening. Final vote is scheduled for Sept. 19, 2017. This plan puts to use the vacant upper floors of the historic building located at 131 Ellison Street, according to economic development director Ruben Gomez.

Gomez said the city will seek proposals from developers to convert the building into apartment housing. The plan requires the developer to rehabilitate the building while preserving its historic character.

“It’s a great piece of real estate,” said Alex Mendez, councilman at-large. He wanted to know how much in new revenue the converted building will bring into city coffers. An estimate was not available at Tuesday’s meeting.

Gomez said the city is looking to relocate the Division of Recreation and the Small Business Development Center. The recreation office, which is within the Department of Public Works (DPW), may be moved to Eastside Park. It’s not clear where the small business center will be moved to; Gomez said there is office space at the Center City Mall.

The mayor wanted to use the upper floors of the building for document storage, according to Mendez.

“The floors can’t support the weight of the papers,” Gomez told the council.

The conversion is part of a broader vision to re-use the vacant upper floors of downtown Paterson buildings to revitalize the city’s commercial heart while increasing tax revenue.