The number of city students tested positive for having drugs or alcohol in their system dropped by almost eight-percent in the 2016-17 school year, according to data released by the Paterson Public Schools earlier in the month.

In three cases, students were found using multiple substances. Five students had to be sent to hospital. And one student was found with and dealing K2 synthetic marijuana inside a school building. 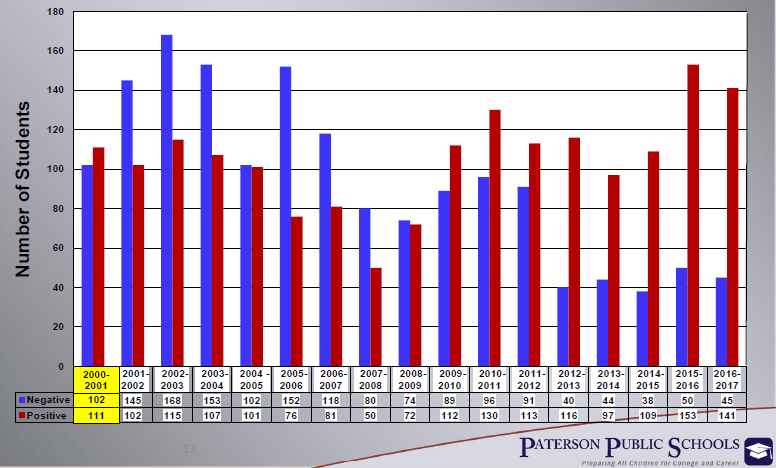 School board members were given a presentation by Kathy Lepore, supervisor of substance abuse awareness at the district, last week. Her presentation highlighted some of the measures the district has taken to reduce the numbers.

For example, the district has school sponsored activities where speakers from the Passaic County Sheriff’s Office, Straight and Narrow, the Paterson Municipal Alliance, and Paterson community policing unit discuss the consequences and dangers of drug use and distribution. Students are taught refusal skills.

The district also works with various local and county organizations like the Paterson Coalition Against Substance Abuse (P-CASA) to discourage drug and alcohol use among students.

In 2007-8, the district had 50 positive cases. This was the lowest since substance abuse data has been kept.

Last year’s 153 positive case was described as “alarming.” It was the highest number of positive cases in 16 years.