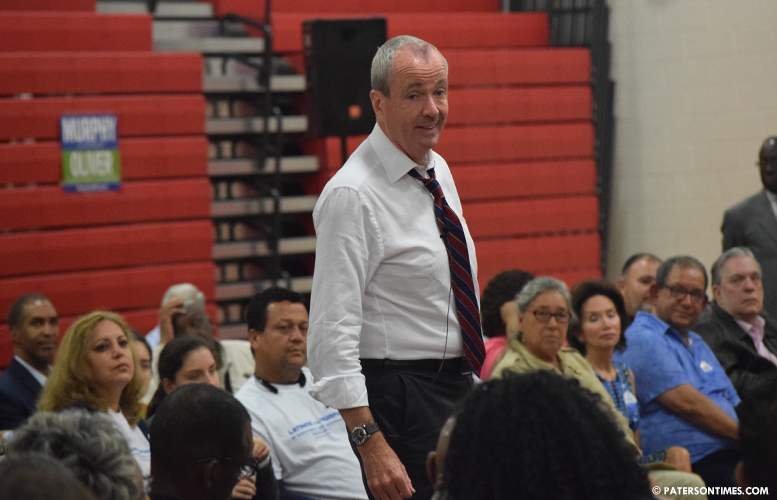 Gubernatorial candidate Phil Murphy rallied his local supporters at a townhall meeting at the Passaic County Community College on Wednesday evening. He used the forum to largely deliver a boilerplate message to more than 100 people that gathered at the college’s gymnasium

$15 minimum wage. Earned sick leave. Child dependent care tax credit. Marijuana legalization. And fully funding the state’s school formula. The last one is particularly important to Paterson which has been underfunded by millions of dollars every year under governor Chris Christie.

For example, in 2017-18 school year, the local school district received $405.7. That’s $76 million less than what is guaranteed in the school funding formula, according to calculations from Newark-based Education Law Center.

Murphy also vowed to work with Paterson on public safety. He did not provide any specifics of how the state government will assist the city in public safety. Some local officials are hoping the state will provide more transitional aid – the city received $25 million last year – to hire more police officers.

“As the big urban communities like Paterson go,” said Murphy, a Democrat, to a crowd that included school board and city council members, “so goes the state of New Jersey.”

Murphy has visited the Democratic city numerous times. Early on in his campaign, he cultivated connections with some local officials and community leaders. He is expected easily win Paterson in November.

Murphy, a Goldman Sachs banker and former ambassador to Germany, has a 27-percent lead over his Republican opponent lieutenant governor Kim Guadagno, according to a statewide survey of registered voters conducted by Monmouth University in July.

“I think we’re in a good place. I also thought the Brits were going to stay in Europe and Hillary Clinton was going to get elected president of the United States. We got to turn every stone. We’re not taking one vote for granted,” said Murphy.

Murphy took a number of questions from the audience that had to do with college affordability and illegal immigration. He promised to allow undocumented immigrants driver’s licenses and create a state identification card system.

Murphy aimed his fire at Guadagno towards the end of the meeting criticizing her for not strongly condemning Republican assemblyman Parker Space of Sussex County for his photo that had the Confederate flag in the background.

“We stand for a robust urban agenda with this community right at the top of the list,” said Murphy. “As Paterson, Newark, Camden, Trenton, and few others go so does New Jersey. Those aren’t just nice words, we will act on that.”