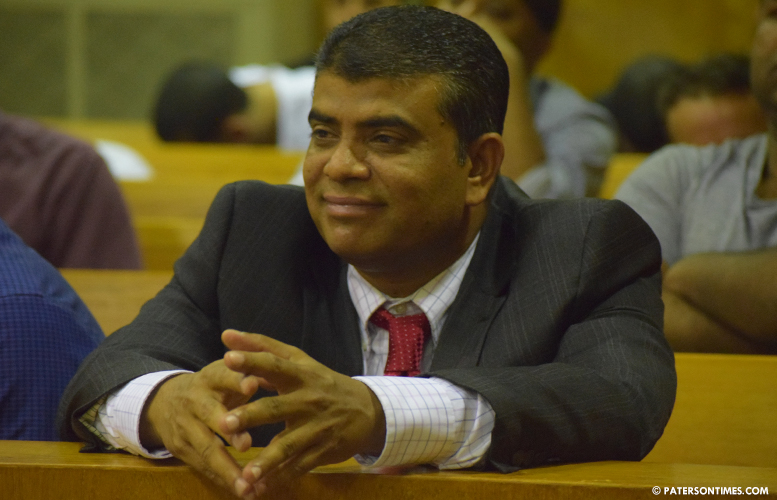 After losing in a bitter election and subsequent court battle, former councilman Mohammed Akhtaruzzaman on Wednesday announced his intention to run for an at-large council seat in next year’s municipal elections.

“When you have a burning desire to serve, you can’t stop,” said Akhtaruzzaman on Thursday afternoon. “A lot of people from different communities have been asking me to run.” He served three years on the council and produced a mixed record. When asked to mention some of his accomplishments as councilman, he cited being a co-sponsor of the business curfew ordinance that, in the first year of being in effect, reduced non-fatal shootings by 79-percent.

Akhtaruzzaman also listed as his accomplishment placement of a police camera on Paterson Avenue. He claims that reduced crime in that street. He is most proud of being responsive to constituents’ complaints, he said.

He also held an annual tax appeal drive, he said. This though is ironic. He ran on a platform to vote down tax increases in 2012, but ended up voting in favor of three budgets that had tax increases.

“I prevented a lot of government shutdowns,” said Akhtaruzzaman when asked about his budget votes. He shut off some voters by supporting tax hikes. He lost to Shahin Khalique in last year’s election by 20 votes.

The three at-large seats up for grabs next year are currently occupied by Alex Mendez, Kenneth Morris, and Maritza Davila. Mendez is forgoing re-election to run for mayor while Davila is vulnerable.

Davila and Akhtaruzzaman were once allies. Both are now sworn enemies. When asked, if he is trying to take revenge on the councilwoman for supporting his main rival last year, Akhtaruzzaman replied: “No. This is revenge against myself.”

The former councilman’s announcement changes some of the dynamic of next year’s mayoral race. Some have suggested Akhtaruzzaman was encouraged to run by mayoral candidate Pedro Rodriguez.

Rodriguez, a close friend and ally of Akhtaruzzaman’s, served as the former councilman’s campaign manager last year. With Akhtaruzzaman running for at-large, Rodriguez will gain a big chunk of the Bengali-American vote. Akhtaruzzaman, who was the first Bengali-American to win a seat on the city council, continues to be popular in his community.

Akhtaruzzaman denied being influenced by Rodriguez. “I had zero influence,” said Rodriguez on Friday morning.

Both men will likely campaign together. Both recognized the mutual benefits that will result. Rodriguez gets Bengali-American votes and Akhtaruzzaman secures Dominican votes. This has not gone unnoticed by others.

Mendez has struck an alliance with Khalique to secure his share of votes from the Bengali-American community which has become an important voting group in the city.