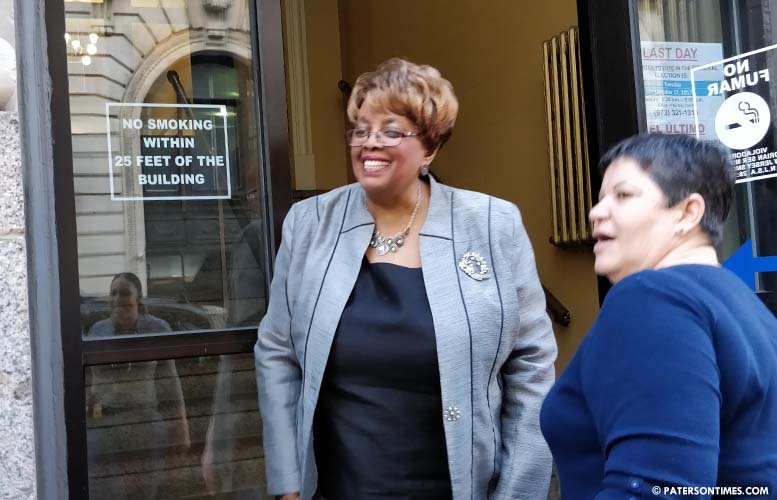 The city’s new mayor Jane Williams-Warren assumed office on Tuesday morning. She entered the historic City Hall building through the Colt Street side door. With her trademark smile and laugh, well-known to municipal employees, she greeted staffers inside both the tax collector’s and tax assessor’s offices while heading up to the second floor.

“I didn’t expect to come back so soon,” Williams-Warren, 70, joked with some of staff members. “I need all of you.” She came out of retirement after council members in a 5-4 vote selected her to run the city government for the next eight months until a new mayor is elected by voters.

Williams-Warren received well wishes from a man who wanted to shake the new mayor’s hand as she entered city hall. “I like people. That’s important,” said Williams-Warren. Even those who voted against appointing her as acting mayor spoke well of the longtime former clerk who retired in 2014.

When asked if she thought about staffing or policy changes she said, “I want to get in and find out what’s what and then we’ll talk about [change].” She has received transition briefings from business administrator Nellie Pou and chief attorney Domenick Stampone.

Cotton had expected to run the city government until next year’s election. Her colleagues maneuvered her out of the seat. Almost 200 of her supporters unsuccessfully attempted to sway the council to keep her as mayor at the Sept. 29, 2017 meeting.

After Cotton was voted out by her colleagues, there were behind the scene talks of convening another meeting to rescind the measure that appointed Williams-Warren in a fresh attempt to re-install Cotton as mayor. Those efforts went nowhere.

Some argued having the council president run both the executive and the legislative branches of government presented a great conflict of interest. For example, as mayor Cotton would have had to present the budget and also vote on it.

Cotton hopes Williams-Warren will make tackling quality of life problems in the city a priority in her administration.

Williams-Warren would not say whether she would regularly attend the council’s deliberation sessions that often run beyond midnight.

Williams-Warren said she has individually spoken to a majority of the council members. As mayor she will receive $119,000 in pay. She plans to forgo her $97,500 state pension to avoid double dipping.

Williams-Warren was sworn into office at her home by Passaic County judge Frank Covello at midnight today before a small group of the new mayor’s husband, family, and friends.

“We’re committed to moving Paterson in a positive direction,” said Williams-Warren. She has no plans to run for mayor next year. “I am a public servant, with a strong personal commitment to my work and especially this position and ask our residents to have faith in me and continue to have faith in our City and its future.”