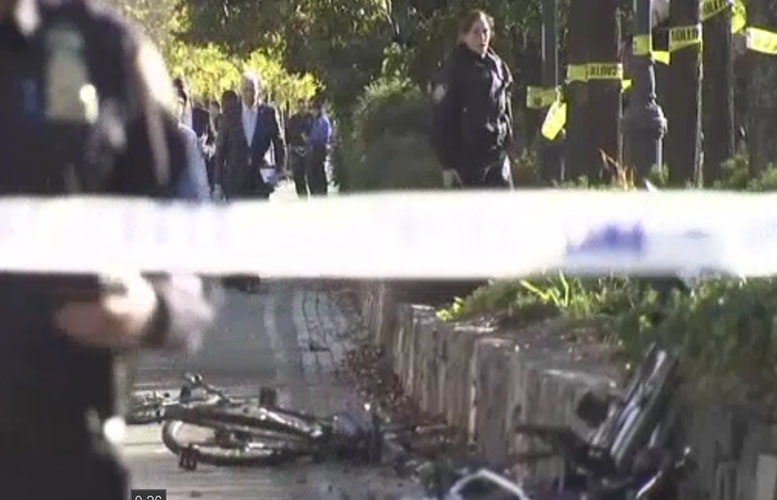 The man accused of plowing a rented truck through a crowd of bicyclists and pedestrians in New York City on Tuesday afternoon lived with his family in an apartment on Genessee Avenue in Paterson, according to sources.

Sayfullo Saipov, 29-year-old, allegedly killed eight people when the truck was driven down a bike lane that runs along the West Side Highway in Lower Manhattan at about 3 p.m., according to media reports. 11 people were taken to hospitals with non-life-threatening injuries.

“God is great,” Saipov yelled in Arabic during the crash.

Saipov jumped out of the truck after it smashed into a school bus. He was armed with fake guns — a paintball gun and a pellet gun. A police officer shot him in the abdomen. He is in critical condition at a hospital, according to media reports.

In Paterson, police blocked off Genessee Avenue between Getty and West Railway Avenues with crime scene tape. He lives with his family in an apartment at 168 Genessee Avenue, according to a neighbor.

Media reports stated Saipov lives in Tampa, Florida. A neighbor said the man drove a van that had a Florida plate and lives in Paterson. The truck in the incident had a Home Depot logo and came from New Jersey, according to law enforcement.

Authorities in New York and the FBI are investigating the incident as a terrorist attack. Saipov came to the U.S. from Uzbekistan in 2010 and is a legal permanent resident.

The incident has been described as a “cowardly attack of terror aimed at innocent civilians” by New York City mayor Mayor Bill de Blasio.

“We know that this action was intended to break our spirit, but we also know New Yorkers are strong, New Yorkers are resilient. Our spirt will never be moved by an act of violence, an act meant to intimidate us,” said de Blasio.

Police in Paterson continued to block off the area where the suspect lived on Tuesday night. FBI agents searched Saipov’s home overnight.