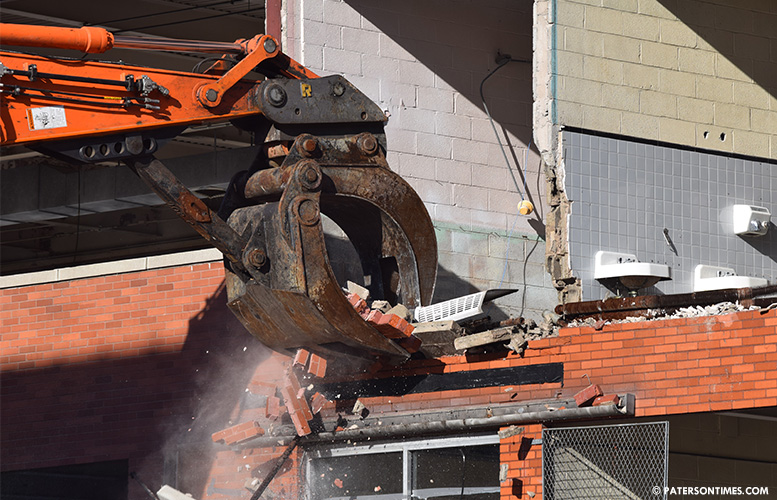 The state began demolishing the old Don Bosco School building on Tuesday afternoon to make way for a new $112.9 million middle school in its place. The new 161,000 square feet building that will stand on the site is expected to open for students in 2021.

School officials were joined by representatives of the New Jersey Schools Development Authority (SDA) to celebrate the start of demolition with a brief ceremony after which an excavator began tearing down the old building.

“A new 21st century building will be constructed right here for the children of this neighborhood,” said acting superintendent Eileen Shafer. “We’re all anxious to see the school building open and bring the children and the staff back home.”

Students from the Hillcrest and Totowa sections have to attend school far away from their neighborhood on the other side of the city. The district had to vacate the building in anticipation of the demolition. The state expected to demolish the building last year. However, by purchasing the old Paterson Catholic building, the state displaced the Paterson Arts and Science Charter School. The charter was allowed to operate out of the Union Avenue building until it moved to a new building on Grand Street this school year.

The new building will be designed to educate 1,000 students in 6-8 grades. It will have 36 classrooms, 9 science labs, a cafeteria with stage, a gymnasium, computer lab, and media center, according to the state.

“The demolition activity commencing today, continues the SDA’s ongoing commitment to provide the students of Paterson with the educational infrastructure needed to help them achieve success,” said Charles McKenna, head of the New Jersey Schools Development Authority (SDA). “The construction activities to ready this site for a new Union Avenue Middle School are under way.”

Students will begin classes at the new building in Sept. 2021.

“Every single day we have educators busting their humps, time in and time out, to provide a quality education. We can only do that if we have complementary facilities,” said school board president Christopher Irving.

Irving lightly pressed the state to build more schools in Paterson. Once completed, this school will be the 7th new building constructed by the SDA in Paterson. This school year, officials celebrated opening of the Hani Awadallah and the new School 16.

As the neighborhood anxiously waits for a new school building to go up, others will miss the old Don Bosco Tech building. A dozen alumni of the Don Bosco Tech gathered at the demolition site to pick up bricks to preserve the memory of their alma mater.

School board member Emanuel Capers graduated from Don Bosco Tech in 2001. He fondly recollected some of his memories at the school like as a junior when he met some of the cast members of the “Sopranos” when the TV show was being filmed in Paterson.

“I got to meet some of the cast. So many memories in each of these buildings,” said Capers.

Capers served dinner to the cast of the “Sopranos” inside the Don Bosco Tech. He met the actors who played Tony Soprano’s wife and son. He also met fellow Patersonian Federico Castelluccio who played Furio Giunta.

Capers also pointed at the empty buildings to show where the auto shop and weight rooms were located.

“Urban legend had it, he got perfect score on his SATs,” recalled Vancheri.

“He got two wrong. He challenged it. And they gave it to him,” added Capers.

“He’s the guy that invented keypads on microwave ovens,” said Vancheri of McGahee.

The Catholic school that Capers and Vancheri attended closed in 2002. The state purchased the building for Paterson schools in 2004 for $6.3 million, according to tax records.

Vancheri and Capers took bricks from the site. So did Joe LePera, class of 1992. LePera picked up five bricks.

LePera said some alums requested he take some for them. There’s a big social media community of former Don Bosco Tech students, he said.

“It’s progress, but sad at the same time,” said Vancheri after the demolition crew demolished a small rear section of the building fronting Sherwood Avenue.

Demolition, which is being done by Keyport-based Tricon Enterprises, will be completed in spring 2018. The firm received a $3.47 million contract for abatement and demolition of the old school. The next phase will involve advertising for a design-build contractor to design and construct the new school.

“It’s always tough to see what you are part of come down, but just know what’s going to arise here is an incredible facility that will educate the students of Paterson for many years to come,” said McKenna.