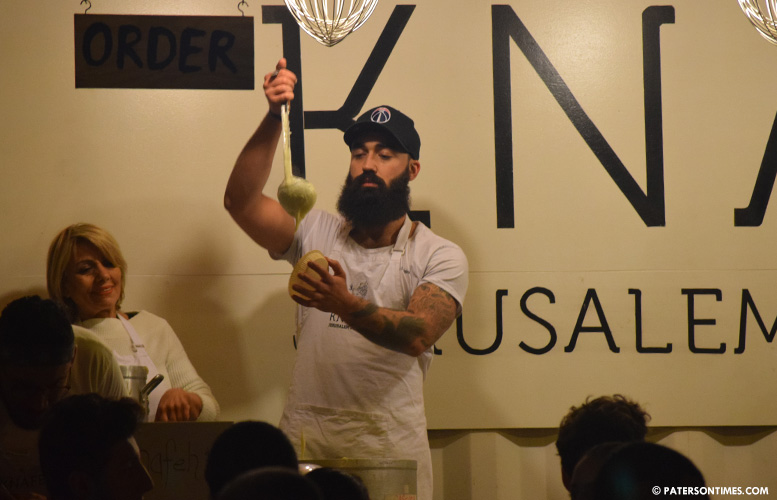 The Bearded Bakers from Australia put up a performance at the South Paterson Park on Friday evening serving up the popular Palestinian dessert knafeh to a large cheering crowd. Some descended on the park on Main Street for the dessert while others came for the performance.

Momen Jamhour came for both. He bought 12 knafeh from the shipping container transformed into a bakery.

“I just came from Jordan. I ate a lot of knafeh so I know what it tastes like. This is the best,” said Jamhour, 33, of Clifton. He said it’s better than the knafeh — a popular Middle Eastern dessert typically made up of sugar, cheese, pistachio, rose water, and kaymak – he ate in Jordan.

The bearded bakers serve up their famous knafeh in South Paterson.

Jamhour suspects the Bearded Bakers slightly altered the traditional recipe for improvement. “It’s lighter. The cheese isn’t as thick. They made the top layer very thin,” he said.

The audience stood mesmerized as the bearded men prepared the desert while dancing to both American pop music and Arabic songs.

“It’s a lot of fun. There’s a smile on every face,” said Jamhour.

Mohammad Ros, who traveled from Austin, Tex. to Paterson to visit relatives, was outside when he spotted the spectacle.

“It’s worth every second,” said Ros as he watched the men dance, sometimes jumping on top of the counter, while preparing the knafeh orders.

“We sell an experience. We showcase the Middle Eastern culture in a way that’s never been done before,” said Ameer El-Issa, an architect and one of the Bearded Bakers.

The Bearded Bakers began three and a half years ago in Sydney, Australia. The group is made up of architects, designers, and restaurateurs. Its bakers come from diverse heritages — Palestinian, Jordanian, Afghani, Turkish, and Syrian.

In all there are 50 people who make up the Bearded Bakers. Six of them flew in from Australia for the Paterson performance.

There are 10 bakers in New York City. The group is also recruiting locally, said El-Issa. The bakers have become an international phenomenon with their travelling bakery. The group’s headquarters is in Sydney. It has launched in Melbourne and New York City.

Every week or two, the Bearded Bakers hit a different location. The information is released through social media and fans flock for their knafeh which is prepared from a secret family recipe.

El-Issa said not only is the bakery showcasing rich Middle Eastern culture, but also changing the perception of Arab men in a way that he describes as “groundbreaking.” Indeed, bearded men, especially from Middle Eastern countries, have been closely associated in the media with terrorism.

El-Issa and his group was invited to Paterson by deputy mayor Ray Baker and councilman Andre Sayegh through the Palestinian American Community Center.

“Paterson has welcomed us with open arms,” said El-Issa.

Sayegh said having the group in South Paterson attracts more commerce and further strengthens the claim that the southern portion of the city is a regional attraction.

“It’s inclusive. That’s the good thing,” said councilman Luis Velez, who was at hand at the event. “They are singing everything.