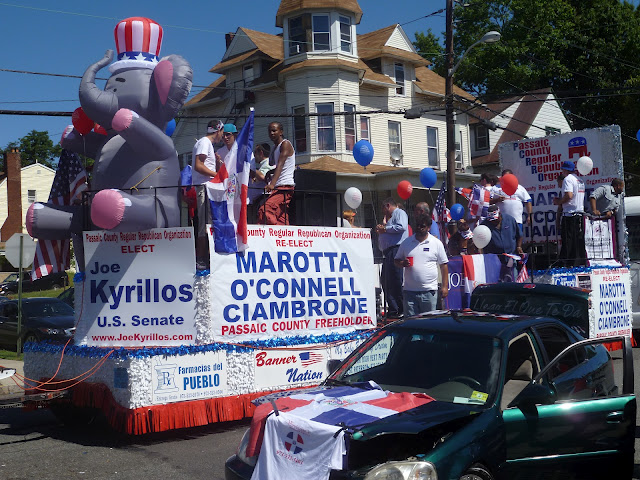 The street surrounding Park Avenue were closed, barricaded with orange and white striped cones, for the annual Dominican Day Parade. Thousands of city residents, as well as non-residents from elsewhere, descended on Park Ave to take part in what is an once a year celebration of Dominican culture in the United States.

Earsplitting Spanish music sounded from parade carts — it could be heard from a mile away –, while many standing top floats danced while waving the Dominican Republic flag.

Some residents, were sitting on their lawns watching the spectacle unfold in front of their homes, not alone, but with their families. In one instance, a group of 5 people were sitting on their home steps observing the parade, among the group were children as young as 3-years of age, and adults as old as 50. All age group came out to witness the celebration.

Businesses took advantage by sponsoring the event, and having their own floats with massive banners hanging from them with their business names scribed in large fonts. Politicians did not miss out on the opportunity, they too had large banners: Joe Kyrillos, a Republican running for the senate this November, had his poster hanging on a parade vehicle.

Around Paterson, Dominican Republic flags could be seen conspicuously displayed on cars and hung on porch pillars; and the colors worn by men and women walking to the parade; and children holding miniature flags on hands; all of which saying one thing: “We are Dominicans and we are proud of our culture, history, and heritage!”