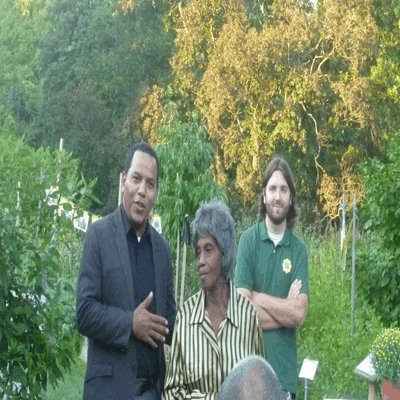 Urban farmers of all stripes gathered in East Side Park to decide who has the greenest garden in the area. City Green, a promoter of urban farming, organized the event. It visited a large number of gardens around the city, took photos of each, and then placed them in an head to head contest to determine which garden would win the greenest in Paterson.

There were many runner ups, but only one woman won the most prestigious prize of the evening, and that was: Sarah Jane Kerr (pictured). Ms Kerr won twice, once in the Best Container Garden category, and a second time in the Best Green Your Block category. We were informed Ms Kerr also won the last year’s main prize for greenest garden as well.

Prizes were almost all garden related from pots with beautiful vases to lights for the garden, as well as others.

Although not a single newspaper showed for the event, Paterson Times was there incognito; for we wholeheartedly support grass roots movements that attempt to reform the habits and ways of city folks, which is exactly what City Green does by doing what it can to promote urban dwellers to grow their own fresh food during the summer season.

In the words of the 6th ward councilman, Andre Sayegh, “thank you for beautifying our beautiful city.” Council members Andre Sayegh and Julio Tavarez were both in the audience.

Below are the list of all winners from the Wednesday, September 12, 2012 City Green Garden Contest: