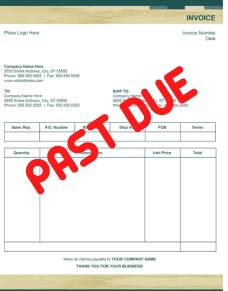 We have reported in a previous article that the city was set to hire a collection agency to go after delinquent individuals this week, but due to a lack of information the City Council has decided to delay the decision.

A choice was set on Professional Account Management, a collection firm based in Wisconsin, which was to collect the more than 7m dollars worth of delinquent dollars kept away from the city coffer. The agency would receive 22-percent and the city would get the rest of the collected cash, but there were few other companies that wanted in on the collection.

One company offered to take 20-percent which would leave the city with 80-percent. Council members wanted to know why a firm giving 2-percent less was proposed for hiring rather than the one giving 2 percent more. When the question was raised, Charles Thomas, the city official entrusted with the hiring, merely said Professional Account Management had a track record for going after older accounts and being successful at it.

The city council asked for evidence, Mr Thomas could not provide any at the moment, which subsequently resulted in the postponement; it is likely that the council will hire one or another of the agency during its next meeting.