Post Storm Scam Artists: Where to Report Them | Paterson Times 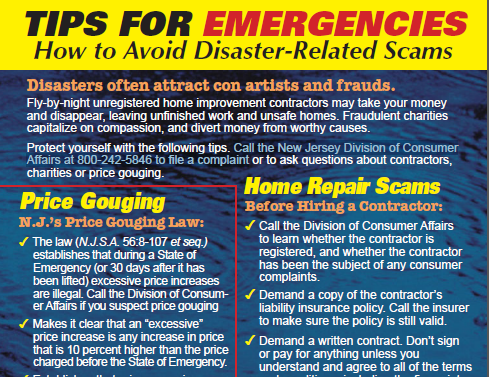 Outside a gas station on Main Street a crowd gathered with gas cans in hand after learning of news that the station would soon open. Seeing the gathering a rough-looking opportunist taxi driver came out of his vehicle and delivered an inane speech: “I will take any of you that wants guaranteed gas for 25 dollars,” he was willing to transport anyone interested. Patersonians being as sharp as they are, responded to the man coldly, ignoring his pitch, and some of them laughed at the man thinking, “what an imbecile.”

The Reliable Inc taxi driver then, after realizing he had failed, got in his taxi and left.

Not all residents are this prepared to thwart the attempt of scam artists, as a result the State has released a guide, that informs New Jerseyans to watch out for scammers.

There will be be gas stations that will wish to profit from the misery of residents in desperate need for fuel by jacking up prices (if the price has gone up by more than 10 percent report it); there will be contractors that will pretend to be legitimate businesses in an effort to defraud; there will be false charities that will say they are taking donations for Hurricane Sandy only to fill their pockets; if a company or person is attempting to rip you off report it: “Call the New Jersey Division of Consumer Affairs at 800-242-5846 to file a complaint”.

As is common sense gather evidence: take pictures, collect information, and report it all.