Much about nothing: Sirrano Keith Baldeo, and racism | Paterson Times 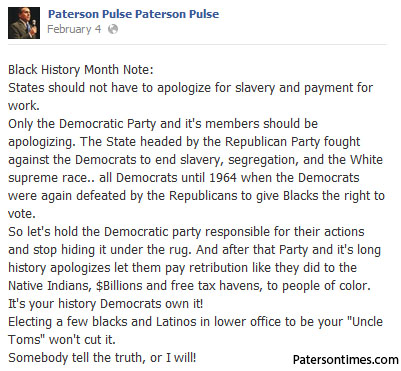 On February 4th, 2013, Sirrano Keith Baldeo, president of New Jersey Pulse, a monthly tabloid, said on his Facebook page, “ States should not have to apologize for slavery and payment for work.” Instantly his opponents grabbed his words, and organized a boycott of his newspaper.

During the city council meeting of February 12, Ernest Rucker, a long time opponent of Mr Baldeo went in front of elected officials to inform them of a boycott he had organized against the tabloid; he, along with Aslon Goow, former 2nd Ward councilman, implored the city council members to avoid doing interviews with or for Mr Baldeo’s paper.

Mr Goow is often lampooned and attacked in the tabloid over his politics and sometimes over his religion. Mr Goow is a combative character, not unlike the present governor of the State, who is quick to pick fights with those who disagree with his views, and Mr Baldeo is no different which might be a reason for the enmity between the two men.

Trapped in the middle is the deceased former mayor of Paterson, Martin Barnes, whose son, Marcus Barnes, says Mr Baldeo attended his father’s wake and disrespected the entire Barnes family by forcefully attempting to take pictures of family members weeping and mourning over their loss even after being told not to. Marcus Barnes, son of the former mayor, informed the city council of Mr Baldeo’s inappropriate behavior at the funeral, and he wanted Mr Baldeo and his tabloid to stop using the Barnes family name.

Two weeks after his initial boycott announcement Mr Rucker appeared in front of the council and said he will get the Passaic County Prosecutor’s Office involved because Mr Baldeo brought his family into the mess. During that same meeting Mr Baldeo took to the microphone to clarify his remarks saying his comments were taken out of context, and revealed that Mr Goow intended to run for the State Assembly as a Republican (Mr Goow is a Democrat).

After much of the war of words came to a halt, the local chapter of National Association for the Advancement of Colored People (NAACP), a civil rights organization, daftly stepped in on the side of Mr Ruckers, passing a resolution on February 28th to boycott the tabloid newspaper.

Although Mr Baldeo’s comment is a bit insensitive, especially when his sentence is viewed without context, it cannot be rightly viewed as a racist remark because it is more or less a partisan political comment rather than one intended to be bluntly racist or overtly offensive: he says in his second sentence, “Only the Democratic Party and it’s members should be apologizing. “

And he is for reparations and apologies, “Let them [Democrats] pay retribution [sic] like they did to the Native Indians, $Billions and free tax havens, to people of color,” said Mr Baldeo in the middle of the same Facebook posting cited by his opponents as including racist sentiments.