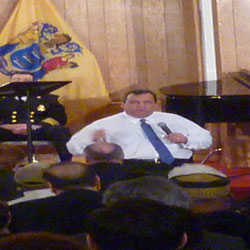 Outside the church, where Chris Christie  held his town-hall meeting were protesters, some holding hand written signs voicing opinions against the governor, others yelling slogans supporting his opponent Barbara Buono.

Inside the governor opened his remarks by citing the very little support he received in Paterson during his last election, and how he has unified the city’s resident by acting as a figure of hate which brought people together around a common cause.

There was very little that was new in the meeting save: a marijuana grower who complained about the red tape that has kept him from opening up shop in the city; a board of education member who, asked when will the state return the Paterson school district back to local control — it has been more than two decades, and he cited as his evidence the State has failed to improve the local schools. And youths, one of them asked why his school does not hand out iPads while other schools do, and another youth complained about the large number of State exam she suffers through in school.

The industrial farmer was told that a staff member of his administration would take his detail and get back to him on cutting through the tape; the State control of school received a much longer response that included the massive amount of aid the district receives from the State, and Mr Christie  also brought up the situation that existed in the city prior to State control when schools were far worse. And he added, “We’re not going to give back control just because it’s not working as we wish it to,” of course it is being paraphrased here.

In middle of all this, a man sitting in the middle, back, of the room shouted, “Fix the public schools!”; Mr Christie  rebuked him few times because the man would not relent. Security officials wanted to escort the diverted out of the church, but the governor taking the moral high ground allowed the man to stay.

One 11th grader spoke at the meeting informing Mr Christie that her school does not even have books, to which Mr Christie  answered it was not because of a lack of money, but has more to do with “incompetence” of district leaders.

Most in the audience, to the very end of the meeting, knew for the most part that this was indeed a cynical political move on part of Mr Christie to gain support in the city, in an important election year.