Paterson youth, who went missing in 1972, has been identified | Paterson Times 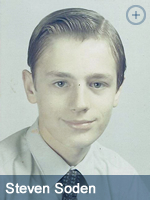 A Paterson boy who went missing some 40 years ago has been identified using DNA, according to New Jersey State Police.

In 1972 the boy, Steven Soden, 16-year-old, was staying at a Paterson orphanage, and went on a trip to Bass River Park as part of a group of 18 children and four adults. The group went to the park for camping and outdoor activities. On April 3rd of that year, Mr Soden and Donald Caldwell, 12, a friend, went missing — no one had heard from the two since.

In 2000 a state trooper walking near Bass River Park found some bones and a pair of sneakers which was turned over to the State Police Forensic Anthropology Lab, a division of New Jersey State Police that deals with bones and remains to identify whether they are of people. An initial investigation yielded nothing.

Because the bone was submitted to the lab it was inserted into a national database which eventually lead to the identification of the bones as that of Mr Soden. An university in Texas connected the pieces, and contacted the lab with its finding.