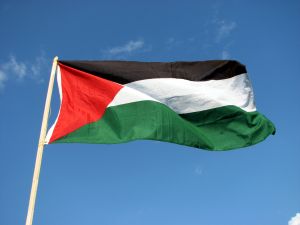 The long standing conflict between Palestinians and Israelis came to Paterson last week when officials at the City Hall allowed a group to raise the Palestinian flag over 155 Market Street.

On Sunday afternoon more than 100 people gathered in front of the City Hall to chant “Long Live Palestine” over the national anthem of that nation. The ambassador of Palestine to the United Nation was in attendance.

However, many of the right-wing bloggers, who began ad hominem attacks against the event’s organizer and the city, did not get that message.

One blogger disparaged the city by describing it as “a mecca for Hamas terrorist supporters” – that same blogger misspelled the city’s name. Another blogger called the flag raising “the exaltation of evil”. These inflammatory and intolerant remarks are common in right-wing blogs if they are not attacking Palestinians they are attacking Obama Care or some other delusionally perceived ill that is happening to American society.

However, Lori Lowenthal Marcus of the Jewish Press, dug up information about the organizer, Khader Abuassab, of the Arab American Civic Organization, the man who promoted the event in newspapers and through text messages, and revealed him to be a fraudster who racked up large amount in credit card debt before declaring bankruptcy. A piece of information that as Mr Abuassab has described “not relevant to this discussion”.

The discussion is about the flag raising not about the man’s past.

Arabs, mainly of the Palestinian ilk make up a large minority in the Silk City, which makes them entitled to a flag raising just as much as the Dominicans or African-Americans. After all, the purpose of these events is to recognize the melting pot that is Paterson. And it is fitting to quote the mayor, “If they’re citizens of the city of Paterson, they have every right to raise the flag.”

Those who are denouncing the flag raising think that a city in America has recognized Palestine as a state, and fear that today a city is doing it, tomorrow it might be a state, and the next day the country.