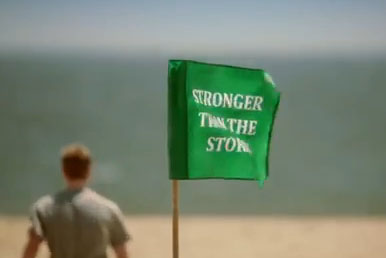 “When Irene and Sandy came there was no “stronger than before” it was Paterson figure it out,” said Jeffrey Jones, the mayor of Paterson, light-heartedly, with a mocking voice, while delivering his 3rd State of the City address on Thursday afternoon.

The pun, which went almost unnoticed during delivery, makes fun of the wildly popular commercial that has taken the television and radio stations of the tri-state area by storm. The commercial informs tourists that the Jersey Shore is open for business.

Mr Jones was referring to the large scale damage done by Hurricane Irene in 2011 which drowned almost the entire city – during that storm Chris Christie, the governor of New Jersey, did very little to help the city. Yet when Hurricane Sandy destroyed other parts of the state the governor sprang into action, doing his utmost to comfort those affected. And making a name for himself in the process; very few remember what the governor did during Hurricane Irene.

The pun makes sense, for the city has yet to fully recover from Hurricane Irene. A library in the northern quarter of the city, which was flooded during the storm in 2011, still remains closed.