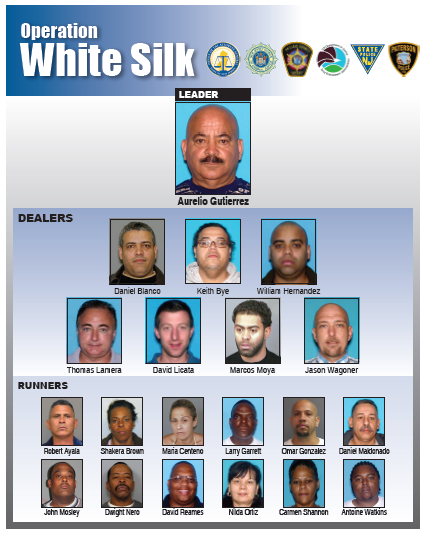 20 individuals, including the ring leader of a massive drug distribution network that was selling more than a thousand oxycodone pills per week, were charged earlier today, in what officials call Operation White Silk, according to the New Jersey Attorney General’s Office.

Aurelio Gutierrez, 59, a city resident, who is being called the ring leader of the network was arrested on July 11th, 2013; Daniel Blanco, 47, of the Bronx, NY, was also arrested the same day on Broadway.  “They were arrested on Broadway in Paterson as Gutierrez allegedly sold 110 oxycodone pills to Blanco,” according to the attorney general’s office. During the arrest officers recovered 110 oxycodone pills. When authorities checked Mr Gutierrez’s car and home on East 17th Street they found more than 500 pills.

Mr Gutierrez was the mastermind behind the operation; he used a large number of drug dealers, almost of them were arrested earlier today, to peddle is illegal pills: Daniel Blanco, 47, of the Bronx, N.Y., arrested with Gutierrez; William Hernandez, 39, of Paterson; Thomas Lamera, 58, of Warren; David Licata, Jr., 34, of Nutley; Marcos Moya, 33, of Paterson; Jason Wagoner, 35, of Lafayette; and Keith Bye, 50, of Hackensack.

“Gutierrez allegedly controlled and directed the activities of the runners.  He allegedly paid the runners enough for them to make a profit, reselling the pills at a substantial markup to other dealers.  Dealers or “pill brokers” from all over northern New Jersey allegedly came to Gutierrez in order to purchase prescription pills, primarily oxycodone,” according to the attorney general’s office.

How did he get his hands on the oxycodone pills? Mr Gutierrez employed a network of what authorities call runners to obtain the pills by having them visit doctors for legitimate illnesses and then buying those from them at a reduced price. Almost all the runners were residents of the city: Shakera Brown, 53; Dwight Nero, 57; Robert Ayala, 54; Omar Gonzalez, 42; Daniel Maldonado, 55; David Reames, 52; Antoine Watkins, 31; Nilda Ortiz, 61; Maria Centeno, 48; Carmen Shannon, 45, all of them city residents. Larry Garrett, 49, of Lodi; and John Mosley, 48, of Hackensack.

Out of the 20 names listed only four remain yet to be arrested the rest are in the Passaic County Jail. “This pill ring we dismantled in Operation White Silk reaped its supply of oxycodone pills from a variety of sources. As resourceful as these dealers may be in obtaining pills, we vow to be more resourceful in catching them and putting them behind bars,” said Elie Honig of the Division of Criminal Justice, one of the agencies that worked closely with the Attorney General’s Office, Passaic County Sheriff’s Office, Paterson Police Department, and the U.S. Drug Enforcement Administration.