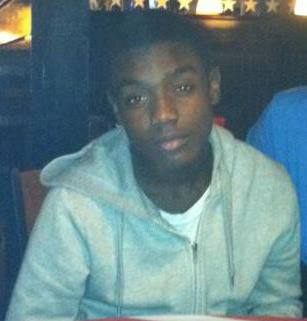 Jaquell Johnson, 17-year-old, of Godwin Avenue, was playing basketball outside on the street during National Night Out, when a gunman walked up and sprayed bullets, leaving the teenager dead on the street.

Johnson and friends were at the basketball court shooting hoops at around 11:20 p.m. on Tuesday when the gunman approached and began firing. Friends of Johnson expressed grief on his Facebook page: “I remeber that day me you & nana was hungry & we start cooking,” wrote Tayquan Watson recalling some past event, when he and Johnson prepared food and the teen was raving at the taste of the cooked viands.

Many of his friends, who setup makeshift memorial on Godwin Avenue, recalled the funny character that they often found in Johnson, Shyllaisia Jones, a friend of the slain recalled, “I Remember it was like Yesterday. We was in English & History Buggin Out.” Others were shocked at the untimely death, “Can’t believe its you,” wrote DeeDee Love, a classmate of Johnson.

Another teenager was shot on 6th Avenue, less than a mile away, the same night in a separate incident whose name police have yet to release; the body of the teenager was recovered by police near East 26th Street at 5:20 a.m. on Wednesday.

Johnson, a student at East Side High School, was set to graduate in 2014. Another, Octavia Davis, wrote, “Havent Stopped Crying Since I Got The News.”