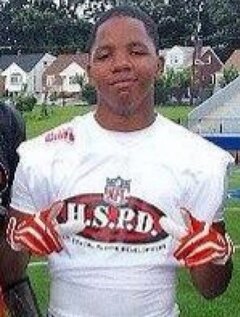 Derrick Fritts, 17-year-old, of Governor Street, the second victim, who was shot during National Night Out near East 26th Street and Plesinger Place, was left on the street until officers from the Paterson Police Department recovered his body on Wednesday at around 5:20 a.m.

Fritts was not carrying any forms of identification with him which made it difficult for police to notify his family of his demise making the release of his name impractical until his kin were informed. After informing the family, police released the victim’s name a day later on Thursday.

After being exposed to the news, friends of Fritts were distraught, “They ain’t find Derrick body til this morning , so he was just laying there dead & ain’t nobody even know smh RIP BABY,” says a Twitter user who changed her name to RIP Master Pea. It is unclear for how many hours the teen’s body was on the street; however, regardless of the number of hours it is bound to sadden those who are close to the victim contemplating: here is a teenager who was shot and left on the street without anyone realizing it until police came onto the scene and recovered his body.

Fritts, like Jaquell Johnson, the other teen who was shot and killed during the same night while playing basketball near Auburn Street and Godwin Avenue, was a student at Eastside High School, where he was in the football team. Victor, one of his classmates writes, “RIP Derrick Fitts, you was mad cool always, making me people laugh you was a cool as friend we drifted away from each other after a while but i regret that a lot.”

Classmates of Fritts memorialized the slain by putting up graffiti inside a locker room at the school in his honor; the drawing of the school mascot, the ghost, wearing an orange jersey with the number one on it, and on top in bold letters it says, “R.I.P Derrick.” Others expressed their condolences for the youth, one Nai wrote, “Smiling for Derrick, cause I know he smiling down on me.”

Like Johnson, Fritts was set to graduate at the end of next school year.