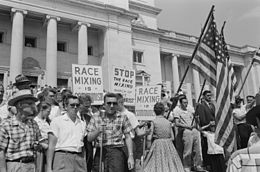 It is common to have someone throw the word “ignorance” into the mix during a discussion on racism, implying that, racism wells from the racist being ignorant or the bigot simply lacking in intelligence; however, a new study out of Michigan State University severs the connection between ignorance and racism.

Geoffrey Wodtke, a researcher, surveyed 20,000 white respondents, examining their cognitive abilities using well-known verbal intelligence tests, and connecting it with their attitudes towards African-Americans and policies set in place like affirmative action to correct racial inequality. The average age of the respondents was 47 and each individual had completed about “12.9 years of education,” according to the study. After testing the intelligence of the group, Mr Wodtke found that highly intelligent whites were just as racist as those who were not very intellectually endowed. “High-ability whites were more likely than low-ability whites to reject residential segregation,” reads the study.

Mr Wodtke also found that only 23-percent of highly intelligent whites supported school busing programs, often used to transport minorities into less diverse schools, while 27-percent of low-intelligence whites supported it. A paltry difference of only 4-percent between the dolts and the highbrows.

The study found the eggheads more able to believe in racial equality in principle while not in practice. Smart whites do recognize racial discrimination at work and increased segregation in neighborhoods and majority of them support school integration in principle. “The principle-policy paradox is much more pronounced among high-ability whites than among low-ability whites,” says Mr Wodtke. “There’s a disconnect between the attitudes intelligent whites support in principle and their attitudes toward policies designed to realize racial equality in practice.”

“Intelligent whites give more enlightened responses than less intelligent whites to questions about their attitudes, but their responses to questions about actual policies aimed at redressing racial discrimination are far less enlightened. For example, although nearly all whites with advanced cognitive abilities say that ‘whites have no right to segregate their neighborhoods,’ nearly half of this group remains content to allow prejudicial real estate practices to continue,” says Mr Wodtke.

How do you explain racism if it is not a result of ignorance and insensible stupidity? Mr Wodtke suggests that the dominant groups wish to preserve their privileges in society by keeping others out of good schools and good neighborhoods. He concludes, “In modern America, where blacks are mobilized to challenge racial inequality, this means that intelligent whites say — and may in fact truly believe — all the right things about racial equality in principle, but they just don’t actually do anything that would eliminate the privileges to which they have become accustomed.”