Rape, robbery, and auto theft up; everything else down | Paterson Times

Murder in the first six month of 2013 has declined remarkably by more than half compared to homicides in the first half of 2012, leading many to claim crime in Paterson is down in general; however, that is not the whole picture: rape is up, robbery is up, and motor vehicle theft is up.

From January to June 2012 there were a total of 11 murders in the city, according to data from the Paterson Police Department. During that same period this year there were only 5 murders, an astonishing improvement in murder rate by 54-percent. Similarly, aggravated assaults, incidents where individuals were attacked using weapons that could have easily had them sleeping inside a coffin, also came down by 36 incidents in the first half of 2013 compared to that of the previous year. 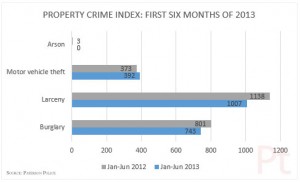 Burglary was reduced by 58 incidents: in first half of 2012 there were 801, in that same period in 2013 there were 743, marking not a steep decline, but still a reduction. Larceny, non-violently taking possession of another individual’s property, has been curtailed by 131 incident compared to the previous year. The criminal act of setting one’s own property or that of another’ on fire, arson, was virtually eliminated during the first six months of this year, whereas the same period last year witnessed three acts of arson.

The reduction of arson, murder, larceny, burglary, and aggravated assaults has prompted many to declare that crime in the city has come down. Earlier in the year, Jeffery Jones, the mayor of the city, declared, “Crime in Paterson is drastically down.” A statement that has gained him a great deal of scorn from residents. Although crime is not “drastically” as Mr Jones says; however, based on the data obtained from the police it appears crime has gone down in most categories, but not in all.

Rape has increased by 19-percent: during the early half of 2012 there were 9 rapes, while during the same period in 2013 that number went up by 3 to 11. After a murder, one drifts away into eternity without looking back; however, in rape an individual has little choice but to live with it, suffering the entire time. 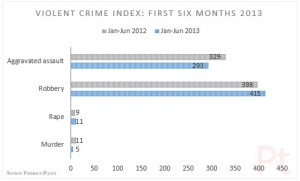 The scourge of robbery that prevents residents from heading out the door or walking the streets, fearing some hoodlum will walk up and snatch one’s phone and wallet and run away after delivering a quick blow, has inched up slightly in the first half of 2013 compared to that of the previous year. In 2012 there were 398 robberies that were reported to police; in 2013 that number climbed to 415, marking an increase of 17 incidents.

“I just looked at the overall statistics for crime in the city this year, and everything is down by about 11-percent,” said William Fraher, the city’s chief of police, earlier in the month. Mr Fraher was likely basing his comment on the decrease in larceny, burglary, aggravated assault, and murder.

Excluded in the charts are the recent incidents of violence, including the recent spate of murders that started in July and continued into August. Summer months are known for increased criminality in major cities, and this city is no exception. Those incidents will be calculated into the year-end crime index, this report only compares crime data for the first six months of 2012 with the first six months of 2013.