The president comes into his own | Paterson Times 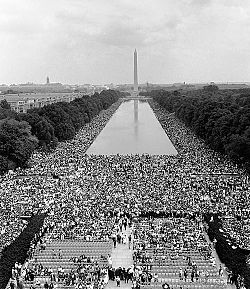 Walter Lee Younger, the fictional character from Chicago, in Lorraine Hansberry’s acclaimed play ‘‘A Raisin in the Sun’’ is beset by an identity crisis and financial woes. In many respects his manhood and legacy are at stake. The white citizens of a Chicago suburb offer him money not to move his family into their neighborhood.   He must choose between reaping a financial bonanza by accepting the money or following his heart by refusing the money and risking the consequences. With his son and family looking on, he refuses the money. His mother, proudly proclaims, “Walter Lee came into his own today.”

On July 19, 2013, a non- fictional Chicagoan, President Obama came into his own. The President tossed aside political expediency and spoke about race more candidly than he has since the famed Philadelphia campaign speech in 2008. Throughout most of his tenure he has artfully evaded the subject of race relations. The President has, understandably so, been publicly silent about the impact “his race” has had on bipartisanship. (One can only imagine the private conversations he must have with the First Lady.)  For now, it’s up to the progressive commentators, and those courageous enough to call a “spade a spade’’ to end their silence and speak on the disrespect for the Office of the Presidency and the backlash against his agenda. Both of which have been fueled largely by modern day racism in its various disguises.

Mr. Obama did what no president has done.  He defied political wisdom and spoke from the heart about race in a personal context. The President proclaimed that 35 years ago he could have been Trayvon Martin. He related that like most black men he had experienced being followed when entering department stores, heard car locks click as he approached, and witnessed women tightly clutching purses as he passed by.  Brent Staples, a former editor for the New York Times, eloquently captures the experience in “Just Walk on By: A Black Man Ponders His Power to Alter Public Space” –

“My first victim was a woman- white, well dressed, probably in her early twenties. I came upon her    late one evening on a deserted street in Hyde Park, a relatively affluent neighborhood in an otherwise, mean impoverished section of Chicago. As I swung onto the avenue behind her, there seemed to be a discreet, un- inflammatory distance between us. Not so. She cast back a worried glance. To her, the youngish black man- a broad six feet two inches with a beard and billowing hair, both hands shoved into the pockets of a bulky military jacket- seemed menacingly close. After a few more quick glances, she picked up her pace and was soon running in earnest. Within seconds she disappeared into a cross street.”

This incident happened when twenty – two years old Staples was a graduate student at the University of Chicago.  The “victim” was in no real danger but as is often the case when whites (civilian or law enforcement) encounter a black man on a lonely street danger is perceived.  The “victim” becomes fearful. Cornell West explains in “Race Matters” that the perception or more aptly fear exists because of “historical inequities and longstanding cultural stereotypes.” Staples prophetically concluded that “where fear and weapons meet” —- (as it did that night when Zimmerman encountered and followed Trayvon Martin) “there is always the possibility of death.”

The President‘s message spoke on Trayon’s death without dwelling on race. He attempted to posit the Florida incident in a historical context that informs African American community’s interpretations of that dreadful night. Rev. Harry Jackson, one the President’s perennial critics opined that the speech should have talked more to the white community. Not so. The outrage of the well- intentioned white community emanated from a sense of what is right and wrong-   they believe that it was it wrong to follow, accost, and shoot an unarmed teenager. Such reasoning calls for little commentary.

In contrast, the outrage of the black community comes from a painfully personal space as it irritates wounds not fully healed and arouses suspicion never far from the surface. As for the less well- intentioned conservative community their detestation for the President  either runs so deep it precludes reasoned discourse – or- like Fox’s Bill O’ Reiley, they see the race issue as a black problem. Reilly‘s position is counter- intuitive. Cornell West suggests a better position: to engage in serious discussion of the race America,” we must begin not with the black problem but with the flaws of American society. “

To be sure, the President will be maligned for his candor. For example, conservative pundit Todd Stanes of Fox News immediately called the President a “race baiter in Chief”   and characterized the speech as a calculated attempt to stroke racial tensions. So be it. History will be kinder to Mr. Obama. We can only hope that he has finally realized that there are certain segments of our society that he can never appease. They have meant him ill since the inception of his tenure. Therefore, the President should be less compromising, and articulate the ideals of the coalition that elected him. After all, that coalition represents the future of America.

The President did not attempt to analyze or criticize the Zimmerman trial and verdict. Instead he encouraged state legislatures to reconsider’ the stand your ground defense’. He crystalized the inherent flaws in the controversial defense and its attendant racial underpinnings by asking:   “… if Trayvon Martin was of age and armed, could he have stood his ground on that sidewalk. And do we actually think that he would have been justified in shooting Mr. Zimmerman, who followed him in a car, because he felt threatened…”

Thank you, Mr. President: “keep coming into your own.”