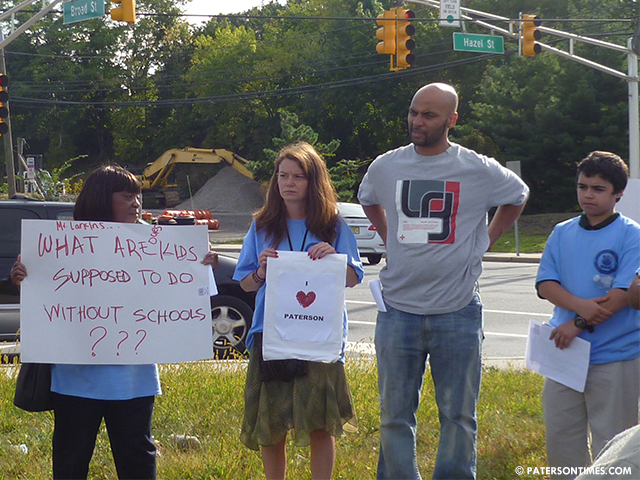 More than three dozen people — including parents, teachers, and representatives from various organizations – stood in front of the unbuilt Marshall Street school on Monday afternoon to mark the 10th anniversary of a failed school building project.

After being approved ten-years ago, very little construction has been done at the school site, only bits of concrete sit at the bottom of the fenced-in soon-to-be school, while weeds as tall as an average person has sprouted, forcing one protester to comment, “We’re growing great weeds.”

“Several of our schools are overcrowded,” said Corey Teague, a school board member. A teacher from School 9, who had been teaching at the school for 27 years, said, that the school was built to accommodate “850 kids,” but now it houses more than “1,300,” making the school “very overcrowded.”

She said, “I have 32 seventh graders.” Another teacher, Sarah Laldee, of School 2, said, “It’s really really difficult to give kids individualized attention when you have that many kids committed to a class room.”

Laldee said, although her school is not as overcrowded, it lacks a lot of the basic features of an average school: there is “no cafeteria,” said Laldee. Moreover, she says a scarcity of gymnasium space at the school has forced gym classes into the auditorium. “There are P.E. classes that are happening in the auditorium, on the stage,” said Laldee.

If a new school were to be completed and opened it would reduce a lot of the pressure off other schools, according to many at the protest. Currently overcrowded schools are sending students into other schools in the district, sometimes forcing students to walk a greater distance from home, according to Laldee.

“They approved it for Paterson in 2004; broke ground in 2006; put it online again in 2009; and we’re still waiting,” said Rosie Grant, president of the Paterson Education Fund, an advocacy. In July of this year, the New Jersey Schools Development Authority, an agency that builds schools in poorer school districts in the state, released information that stated, “$29.3 million general construction contract to Ernest Bock & Sons, Inc. for the construction of the new Marshall Street Elementary School in the Paterson School District.”

In that same announcement the agency said, “The new 108,700 square-foot facility is anticipated to break ground this fall.” Many point out that fall is here, yet there is nothing happening at the site. “They built a foundation, and now it’s a tree farm,” said Grant, pointing to the weed infested lot.

The school’s anticipated opening date is set for fall 2016, according to the agency. Locals worry, that because there is nothing being done at the site, when 2016 comes, they will be again cheated by the state. The protest serves to nudge forward the development of the much needed new school to alleviate some of the overcrowding in the district.

“They tell us all the time ‘we’re going to do this’, and then when it doesn’t happen they say, ‘this occurred or that occurred’ – it becomes a series of delaying tactics,” said Jonathan Hodges, a school board member. “When Governor Christie wants to do something, he gets it done. Clearly, he doesn’t want to do this.”