An epidemic: black on black crime in Newark and beyond | Paterson Times 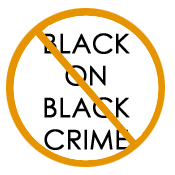 Nationwide demonstrations have been held by groups enraged over the Zimmerman shooting and the “stand your ground defense law.” The law permits the use of deadly force in the face of non-deadly threats. Efforts to repeal state laws that provide for the “stand your ground” and similar defenses deserve high priority. The potential harm to black males, whom are often perceived as a threat, without cause, makes for a precarious situation; as with Trayvon Martin death can be a consequence.

Yet the gravity of Zimmerman type situations pales in comparison to the grim facts informing most black homicides. Young black men are more likely to be murdered by other black men. Moreover, blacks in general are more likely to murder other blacks. Black on black shootings and murders are reaching epidemic proportions across the nation. In few places is this epidemic more prevalent than in the New York/North Jersey metro. This is particularly so in Newark and Brooklyn and only slightly less so in smaller cities like Paterson.

Within one week – from August 25 to September 2, 2013 — eight black men were shot down on the streets of Newark. The evidence suggests that all of the perpetrators were black. The shootings took place in a variety of settings. In one instance, two brothers, leaving a birthday celebration for one of them, were shot while sitting in a car outside their uncle’s house. A third passenger was critically wounded. In another instance, the eighth killing, a young man was murdered while delivering pizza. Incidentally, reprieve does not seem to be in the cards. Since September 3, three more individuals were shot- two fatally, one of which was only 14 years old and another was young lady.

Most black on black homicides are born of gang- related feuds. Or, an association exists between the parties (the perpetrator and victim know each other). But such is not always the case. Increasingly, the murder victims are un-intended targets with no connection to a feud or the perpetrator. Most recently, in Brooklyn, a one year old black child was gunned down. The child’s father, a reputed gang member, and his mother were pushing him in a stroller.  A shooter, who had argued with the father earlier, approached brandishing a gun. The perpetrator fired four shots. The father ran. The child was shot in the head.

The baby’s death raised the number of children ages 16 and under who were murdered in New York to 16 within less than four months (May 2013 through September 2, 2013). Most of the New York murders occurred in Brooklyn.

The isolated statistics of Newark and Brooklyn are indicative of black on black homicides statistics in the wider context. However, examination beyond the raw numbers is necessary. As for criminal behavior, excluding white collar crime, the correlation among crime, poverty and poor education is readily apparent. Poor uneducated individuals across all ethnic and racial lines commit more crimes. Where blacks are concerned any criminal analysis must also take into account the discriminatory practices which inform arrest and prosecution decisions. To some extent, crime figures relating to blacks are likely to be inflated. Yet, even after considering the possibility of inflation the black crime rate statistics are disproportionately alarming as they relate to the actual number of blacks in the population.

The Bureau of Statistic reports that approximately 8,000 to 9,000 Americans are murdered in the U.S. — African American men annually account for approximately 50 % of the homicides each year but make up only 14% of the population. Homicides within the general population fell over the past several years but rose among black males. For example, black male murder victims rose more than 10 % during the period of 2000 to 2010.

Most disturbing is that 93% of blacks are murdered by other blacks. It should however be noted that similarly, 86 % of white homicides are at the hands of other whites. Social scientists attribute the phenomena of black on black and white on white crime to residential segregation that results in “proximity and opportunity.” In other words, one is more likely to murder someone within their geographic sphere and most often those are individuals of the same ethnic background.

One supposes that so long as high unemployment persists, unequal distribution of resources prevails and society consists of the “haves” and “have nots” some crimes are inevitable and can arguably be rationalized. The rate at which blacks are murdering each other defies rationalization and is utterly incomprehensible. Attempts to understanding what fuels this homicide epidemic prompts endless questions: is it emblematic of some deep anger psychosis, or self-hate or hopelessness; is it fostered by a the waning of traditional religious and moral values;  is it society’s fascination with and media’s glorification of violence; or is it the proliferation of handguns and lack of strong gun control policy. Lastly, one wonders whether the propriety and need for racial profiling and the attendant “stop and frisk policies” should become part of the narrative in cities like Newark despite its potential constitutional infringements.

The black on black homicide epidemic clamors for priority on the local and national agenda.  The urgency for action perhaps trumps other legitimate concerns, like the “stand your ground defense.” Black urban communities are infested with a reckless disregard for human lives and the epidemic is causing a state of siege. Just ask the residents of Newark.

Written by W. Ray Kwame Williams, who is an alumni of Eastside High School and a lecturer at Rutgers Business School-Newark and New Brunswick.