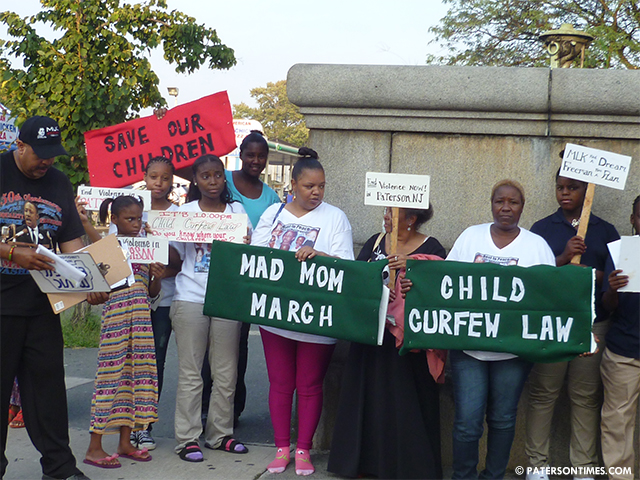 A small band of protesters led by Kim Freeman, a school teacher, marched to the City Hall yesterday afternoon to call for a city-wide curfew for youngsters under the age of 18.

The band of about 15 people gathered on Auburn Street, where Freeman provided them various protest signs that read “Power to the Parents” and “Save our Children”, before leading them to the council chamber, where Freeman picked up a verbal fight with Anthony Davis, 1st Ward councilman, while delivering his speech on the positives of a curfew for minors.

Freeman, who was coach to the two teenagers who were shot during National Night Out, told the council, “All minors seventeen and under,” should stay indoors during school hours and after certain hour of the night; he set the hour at 10 p.m. After Freeman finished with his brief speech, Davis responded saying, “In 2005” curfew passed and it was repealed after folks changed their minds. Freeman, said that was curfew for everyone; however, the plan he proposes only curtails the freedom of movement for minors, and does not infringe on the liberties of adults. Freeman took offense, as each time Davis said, “Curfew” he attempted to correct him by saying, “for minors.”

Prior to marching to Market Street, there were roughly about 400 signatures collected on 20 sheets of papers. While settled next to the Danforth Memorial Library, Freeman setup a table to collect petition signatures from folks passing by on Broadway. “If you tired of young people getting shot please sign our petition,” said Freeman to passer-bys, some of whom signed the petition, but quickly left the premises.

The small number that did march with Freeman were sincere, and wished to actually implement a curfew to keep children home after a certain hour of night. Georgianna Pines, one of those who marched said, “Kids don’t have any socializing places.” She says, sometimes innocent minors are outside, not to do ill but responding to basic needs, who end up dead: a teenager going to a store to buy a sandwich after 11 p.m. is an example she cites.

The call did not land on deaf ears, for before the end of the council meeting, Andre Sayegh, the 6th Ward councilman and council president, reiterated his call to revisit the curfew resolution that was passed and later repealed.

A week ago, Freeman attempted a similar march, however he miscalculated and held it during a workshop session of the council meeting rather than a regular televised session. Freeman, admitted to his error to the crowd, and gave a speech in front of the Danforth Memorial Library, ending the spectacle which was attended by about 50 people. Freeman, who says the lack of turn out will not stop him said, “I am going to keep up.”