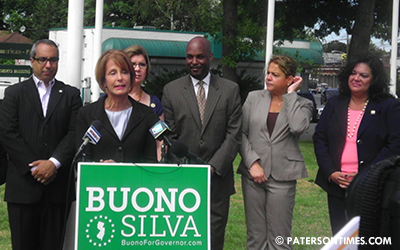 Standing in front of a group of Hispanic leaders from around the State on 20th Avenue, Barbara Buono, Democratic candidate for New Jersey governor, promised to make college more affordable, increase the minimum wage, and help small business grow through tax credits.

“In a State where Latinos make up one-fifth of the population, we need a governor who makes Latino progress a priority,” said Buono, on Monday morning in the Pan-American Park, during a press conference.

Once elected, Buono said, she will work to make sure dreamers, those whose parents brought them to the United States at an early age, will pay the same in-state tuition rate as their high school classmates. “It isn’t fair and it isn’t smart that they should have to pay two, sometimes three times, the in-state tuition in order to go to college or university,” said Buono.

Gertrudez Contreras, an airport worker, shared the problem she is having meeting basic needs, while working on subsistence wage. Speaking through a translator on the microphone, she said, “It’s not enough to cover the necessities of our families,” referring to State’s minimum wage. “I’ve been working with this company [PrimeFlight] for 3 years and I haven’t had an increase in 3 years,” said Contreras.

Buono admits that there are others working against increasing the minimum wage, especially business advocates, who assert that a wage tied to cost of living would result in economic disaster.

A minimum wage increase will “make it easier for Latino New Jerseyans to make ends meet,” reads a statement from her campaign.

In the park there were only politicians and reporters who, after the brief eight-minutes speech, asked questions. A reporter asked, because much of Buono’s campaign focuses on targeting urban areas, whether she has anything for suburban voters. The reporter asked, “Why should a suburban family vote for Barbara Buono?” Responding to the reporter, Buono said, “I hope you haven’t bought into the governor’s pitting urban against suburban.” 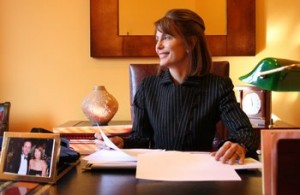