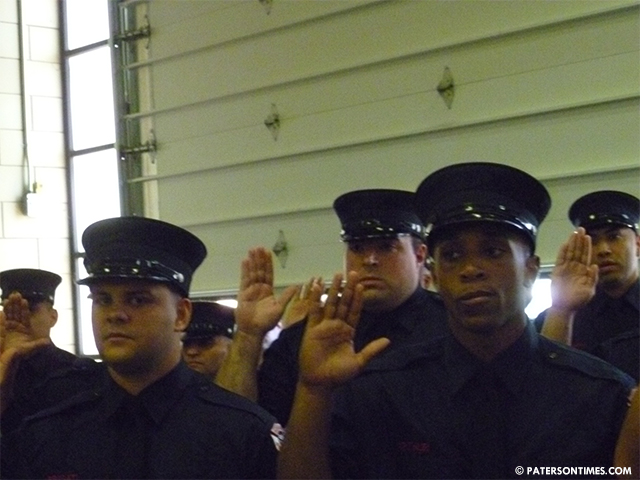 17 new firefighters were sworn into the Paterson Fire Department on Monday afternoon during the 2013 Paterson Fire Academy Graduation.

Family members and friends of the soon-to-be full-fledged firefighters attended the ceremony. Charles Salinas, pastor at the King of Kings church in the city, said, he was attending the graduation for Israel Montes, junior, a parishioner of his. “He told me he was very stressed out lately due to the training,” said Salinas.

Much of the stress that resulted from the 12-weeks of training given to the recruits vanished as many of them stood grinning at the door waiting for the ceremony to start. The excitement among them was palpable.

“I’m feeling excited,” said Leonardo Acosta, 26, a resident of the city. “I’ll be right into the line starting tomorrow.” Acosta said, he would just like to help people.

Another graduating firefighting Jonathan Salmond, 30, who graduated from Rosa Parks High School, said “A fire alarm went off in the middle of the night,” at the apartment where he was staying, while he was outside, and he rushed quickly inside the building and knocked on doors. He later realized, there was no fire, the alarm was just activated in middle of the night. There may not have been a fire, but there was certainly something that inspired Salmond to join the department.

Much of the money to hire the new first responders came from the Staffing for Adequate Fire and Emergency Response Grant, a federal grant that was created by Bill Pascrell, junior, the congressman representing New Jersey’s 9th District in 2000, to address inadequate staffing at fire departments across the country.

The city’s fire department received $6.97 million in grant money in January which allowed the department to retain 40 firefighters and hire 9 new ones; the city received the 3rd biggest amount in grant money nationally. “You will be appreciated when people think about what you risk,” said Pascrell. “Those of you being honored today, know, the citizens will be depending upon you. We’re thankful that you will be on guard to keep us safe.”

“A lot of people would not be here today if it were not for that grant,” said Michael Posterino, the city’s fire chief. “These 23 eventual firefighters will bring this fire department to the level that we need to perform the services for this city.” The other six firefighters will be sworn in the coming months, said Posterino.

Salmond, who was sworn in today, along with the other 16 newly trained responders, said “I feel very prepared.”