Mosque officials in a row over a street naming have filed a lawsuit alleging that their first amendment rights — freedom of religion – was violated when the City Council passed an ordinance to additionally name a section of Van Houten Street after Alhaj Forman Ali, an individual many say played a role in the establishment of the Jalalabad Jam-E-Masjid, a mosque on the aforementioned street.

The lawsuit says the street named after an individual “taints the Mosque” by making one individual, Forman Ali, superior to others – it violates the religious principle that all men are created equal. It also states that many members of the community have contacted the mosque, saying they will no longer attend congregational prayer because of the name change.

Officials from the mosque have been clamoring over the issue for weeks; many attended the council meeting last week to express their vehement opposition to the street naming. Members of Forman Ali’s family too attended the same meeting contesting that their forefather played an immensely important role in the founding of the mosque because, prior to the establishment of the Islamic Foundation of New Jersey, the precursor organization to the mosque, he provided his basement as a makeshift house of worship for locals. And it was there that the mosque got its start, and was subsequently moved to the aforementioned street after the community was able to muster the necessary funding to purchase a building.

Members of the the council, who could not vote to cancel or keep the resolution during the workshop session, told both factions to huddle up and resolve their internal differences amongst themselves without letting outsiders further divide their community.

The lawsuit accuses Mohammed Aktraruzzman, the 2nd Ward councilman, who sponsored the resolution hoping to honor a member of the Bangladeshi community, of patronage because a number of individuals from Forman Ali’s large extended family supported him during the previous election.

Hannan Hussian, the mosque’s president, during last week’s council meeting, called for the cancellation of the resolution, which is on the council agenda for tomorrow’s meeting; the resolution to be voted on tomorrow seeks to rescind the resolution that allowed the name change in July between Curtis Place and Main Street.

If the street naming resolution is repealed tomorrow that will mark the end of the suit. “The foundation is only seeking the rescission of the street naming. If the resolution tomorrow is passed it would make the lawsuit academic, and it would be dismissed,” said Jeffrey Bronster, the lawyer who filed the suit on the mosque’s behalf. 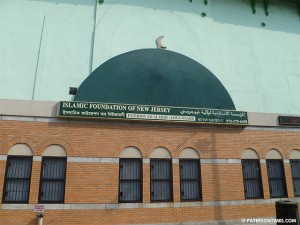