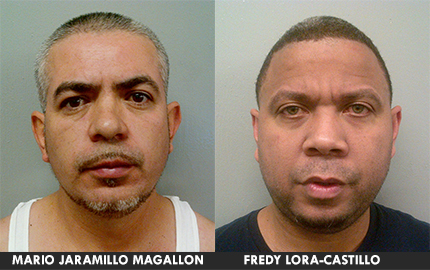 Two men were arrested during a drug bust on 22nd Avenue, according to the Passaic County Sheriff’s Office.

Fredy Lora-Castillo, 38, of Haverhill, Massachusetts, was discovered going in and out of a home on 22nd Avenue which was being used as a heroin mill, a residence where heroin is cut and packaged into bags for street distribution.

Detectives from the sheriff’s office began monitoring traffic at the home. At 10:30 a.m. on Friday, officers noticed a man exiting a green BMW with Massachusetts license plate, and walking into the house. He entered the home with a “blue Gym Bag”, and came out with the same gym bag, while detectives waited for him to get into his vehicle before pulling him over.

“After a brief period, the individual exited the residence with the gym bag and investigative motor vehicle stop was initiated on Trenton Ave near 23rd Ave,” according to the office. Inside the gym bag officers found approximately $500,000. Detectives arrested Lora-Castillo and confiscated the money and the vehicle.

Inside the home detectives found Mario Jaramillo Magallon, 40, an illegal immigrant out of Tijuana, Mexico. “At the residence Detectives discovered that the Attic two bedroom apartment was utilized as a Heroin Milling Operation and Packaging of street level Heroin,” according to Richard Berdnik, Passaic County Sheriff. Officers found drug packaging materials and uncut heroin inside the residence: “A total one pound of Uncut Heroin (street value of $120,000), Drug paraphernalia such as scales, cases of Heroin Glassines, cutting agents were also discovered.”

The office will seize the vehicle, a 1999 BMW 323, and the large amount of cash recovered from Lora-Castillo. “I anticipate a portion of the confiscated cash and proceeds from the sale of the confiscated vehicle will be returned to the County of Passaic and ultimately used for equipment, vehicle purchases and training in the continuing effort to combat narcotics trafficking,” said Berdnik in a statement.

“The two individuals were transported to Paterson Police Booking pending arraignment and Bail Information is not available at this time,” according to the office.