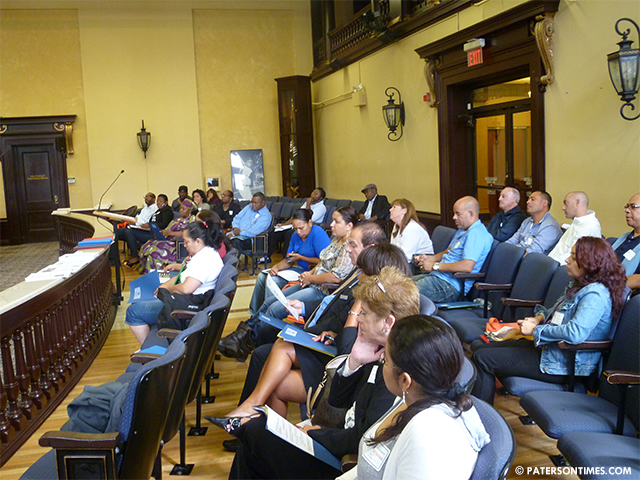 “Make sure the gutters are intact and are taking the water away from the house,” said Leonard Robbins, director of the Housing and Community Development Network of New Jersey, a non-profit concerned with affordable housing, while advising a group of about 35 Patersonians on Thursday morning on what to look for when purchasing a home for the first time.

The first time homeowner workshop, an initiative put together by the Paterson Housing Authority and the Department of Community Development, hopes to encourage residents to become homeowners. In the State homeownership stands at 66.6-percent, while in Paterson that number is less than half, standing at only 29.8-percent.

“We want to become a city of home buyers,” said Patricia Alacron, acting director of the city’s Division of Housing. “We have a lot of foreclosed properties.” The effort is likely an indirect way of increasing the shrinking ratable in the city; in recent years the city’s tax base has declined leading to unsustainably massive tax hikes which further worsens the problem.

“You don’t buy a lemon; you don’t buy a house with a lot of problems, but you buy a home that will serve you well in years to come” said Robbins. He provided attendees with a list of things to watch out for when going to see a potential buy. He said, even if you do find problems with the home, these are “points of negations” that can be used to the buyer’s advantage when both parties sit down to determine the final price of the home.

“It might be good to take a walk around the house,” said Robbins. “One of the things most dangerous to the home is when water gets in.” He told attendees of a story in his own home, where water entered the residence from the outside and dripped on the fuse panel, causing a power outage. “It could have been a real fire hazard,” said Robbins.

After providing a detailed guide on what to look for on the outside of a home, he went inside. Robbins said, rather than rushing to the bathroom and kitchen, it’s best to start in the basement. He said, “Look for moisture in the air,” which could mean there is mold growing in the home. “On the hot water heater and the boiler there are manufacturers’ tags,” said Robbins, look at them to see if you will have to replace them any time soon. He said, if one dates back 20 years, “You have to replace it because hot water heaters don’t usually last 20 years.”

Building a city of homeowners is an arduous task with per capita income standing at only $15,000, so the city is willing to selectively dole out $15,000 to each new home buyer, who goes through a course offered by the Housing Authority of Paterson.

The course, which is a month long, with three meetings, educates potential homeowners the responsibilities of owning a dwelling. “The classes that we do cover several items: we cover managing your money; we cover understanding credit; and we also go over predatory lending,” said Lucy Ruiz, housing counselor with the authority. “We’ll also direct you to programs that banks have available for first time homebuyers.”

In order to qualify for the down payment assistance a family must be making no more than 80-percent of median income in the area; there are other requirements besides the course completion and income eligibility, like only using the home as a primary residence for the buyer – it cannot be used to purchase a 2nd or 3rd home. And the property being purchased must be within the city.

The money for the assistance will come from federal grants, one of the reasons why there are so many hoops through which a homebuyer first must jump through prior to receiving the amount.

The First Time Homebuyers program has been around for a long time said Alacron, but for the past year and half it was paused due to changes in the department. “We’re starting to bring it back,” said Alacron. There is a small group of individuals who will be receiving the amount by the end of this year, but, “we don’t have a lot,” said Alacron.