Hotel to be constructed near St. Joseph’s Hospital | Paterson Times 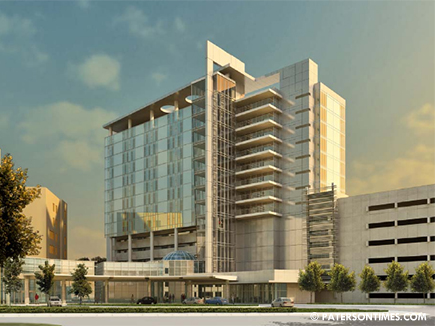 In 18 months there could be ground breaking on the construction of a new hotel near St. Joseph’s Regional Medical Center, according to Frank Brady, chairman of Medical Missions for Children, whose organization is building a 17 storey structure on Main Street.

Brady attended the council meeting to seek an endorsement from the City Council that they are in support of having a hotel built in the city. The hotel, convention center, and medical office building, will encompass two large towers on both sides of the street: one will be 17 storey high and another will be 7 storey. “It’s going to be a convention and banquet center,’ said Brady. “It’s still going to be a Hilton Hotel.”

“It’s been over 30 years since we’ve had a hotel in the city of Paterson,” said Andre Sayegh, 6th Ward councilman and council president. “It’s high time that we move in that direction.” Brady said, the hotel will be named after a historical hotel that was once located in the city in the 1920s. “We’re going to be calling it the Alexander Hamilton Hotel,” said Brady.

By constructing the hotel near the hospital, Brady hopes to collect individuals who have patients at the hospital to conveniently stay next door. “Whenever you build a hotel like that on a campus of a university or a major medical center, you can expect anywhere from 40 to 60 percent of business will be generated by the institution,” said Brady.

Council members were enthusiastic about the prospect of having a hotel in the city. “I’m really excited to see this in my Ward,” said Mohammed Akhtaruzzaman, 2nd Ward councilman. “I am so happy to see that, you guys are still with the thoughts of putting the dollars here in our city,” said Rigo Rodriguez, councilman at-large.

“It’s over a hundred million dollars” to construct the hotel, said Brady, who attended the meeting to obtain a letter of endorsement from the council for the Urban Transit Hub Tax Credit. The credit would show to banks and other crediting agencies that there is a collateral over a long period of time. The tax credit, said Brady, “allows you to build in areas like this, where you couldn’t possibly do it without the tax credit because nobody would take the chance.” Brady is hoping to receive the State’s approval of the tax credit by the end of this year. He said without the tax credit, there will not be a hotel. “If we don’t hear by the end of the year, Paterson won’t have a hotel,” said Brady.

Once constructed the hotel will create 3,500 jobs in the city, said Brady, who hopes to break ground at the site in spring 2014.