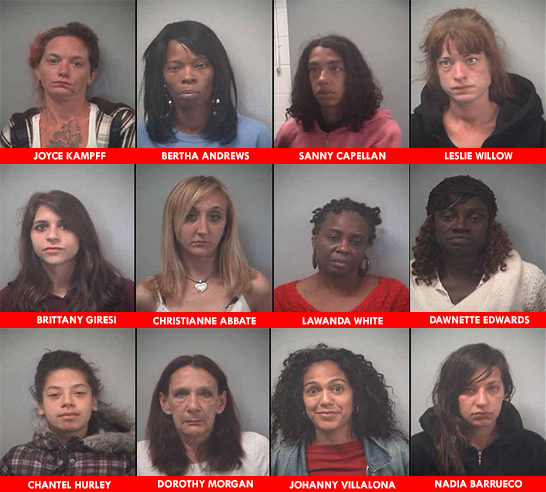 In a quality of life sweep the county sheriff’s office arrested 12 prostitutes soliciting johns on Wednesday, according to Richard Berdnik, Passaic County sheriff. “12 females were arrested for soliciting undercover detectives,” said Berdnik in a statement. Out of the 12, more than half of them were out-of-towners.

Joyce Kampff, 29, of Ringwood, who had a pending warrant for her arrest from Florida, was nabbed near Broadway and East 18th Street; Bertha Andrews, 40, of Newark, who also had a number of warrant out for her arrest – most recent one from East Orange – was caught soliciting near Broadway and Straight Street; Sanny Capellan, 22, of Prospect Park, with an outstanding warrant from Fair Lawn, was arrested near Carroll and Van Houten Streets – Capellan also had a previous warrant from the city for “loitering to engage in Prostitution” from the city’s municipal court; Leslie Willow, 39, of Elmwood Park, who also had a previous run in with authorities for prostitution, was caught near Rosa Parks Boulevard and Broadway; Brittany Giresi, 24, of Andover, was arrested with 10 glassine bags of heroin near East 18th Street and Broadway; Christianne Abbate, 22, of Paramus, was arrested near Market And East 25th Street; Lawanda White, 40, was arrested near 19th Avenue and East 27th Street.

All 12 have been charged with prostitution. The “females were arrested and charged with soliciting prostitution to an undercover officer,” according to the office. The operation came about because residents from the area complained to the sheriff about a large number of individuals loitering outside on Broadway.

“By enforcing the prostitution laws, arrest were also made for outstanding warrants and narcotics,” said Berdnik. “I want to commend not only the Officers involved in this operation, but the citizens who complained to the PCSO about this criminal activity.”