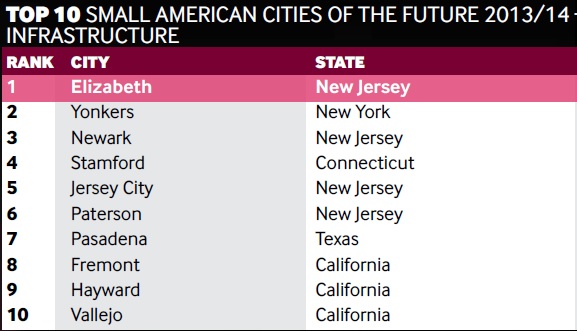 The city was recognized earlier in the week for having the necessary infrastructure in place to support foreign direct investment by fDi Intelligence, a subsidiary of the Financial Times which provides insight to global investors.

In its 2013-14 rankings of small American cities of the future, the organization ranked the city within the top ten spots for infrastructure; the ranking placed the city at 6th place, after Jersey City. “Our Administration has worked diligently to create and implement an economic development vision to make Paterson prosperous and economically sustainable,” said Jeffery Jones, the city’s mayor, in a written statement, who has been pushing to make the city an international hub for investments by providing tours of the city to foreign investors and visiting others to inquire about possible investments.

“Attracting global and international business is priority for the city,” said Jones. During his three years in office, Jones has hosted delegation from India, China, South Korea, and Peru; recently, during the summer, Jones visited India to bring a hotel into the city.

The award for Excellence in Infrastructure was given to the city on Monday in Philadelphia, where the mayor and a team of his staff accepted it on behalf of the city. Ruben Gomez, director of economic development, and Erik Lowe, chairman of the Municipal Utility Authority, accompanied Jones to accept the award. “Awards such as this are beneficial because they acknowledge our locational assets and Paterson’s assets position our city in front of our target international audiences,” said Gomez.

Other cities from New Jersey were also on the list: 1st place was Elizabeth and Newark was 3rd. Jones suggested that awards such as this demonstrates the effectiveness of his administration’s approach to economic development. “This is a tremendous honor for the city,” said Jones.