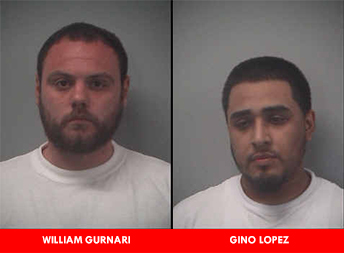 Four people were arrested on Thursday for drug dealing and drug buying at a dead end on Mill Street, according to the Passaic County Sheriff’s Office.

Gino Lopez, 26, a resident of nearby Clifton, and William Gurnari, 23, a city resident, both drug dealers, were sitting inside a vehicle at dead end on Mill Street, where detectives observed there were a number of cars coming in and out. “Detectives immediately observed an excessive amount of vehicular traffic entering and exiting the dead end street,” said Richard Berdnik, the county sheriff, in a written statement.

Detectives had setup surveillance in the area, after receiving numerous complaints from residents; “based on multiple complaints, a surveillance was established,” said Berdnik. The surveillance yielded results when officers noticed a two people inside a Honda Civic approached the van of Lopez and Gurnari; the two men completed a drug transaction, and as they were leaving detectives pulled over the car and made arrests.

Inside the vehicle were: William Dussmann, 39, a resident of Garfield, and Charles Secallus, 41, a resident of Wharton, both purchasers; the two were arrested and on them were bags of drugs. “Occupants were arrested after they were found to be in possession of a clear bag of suspected cocaine, according to the office.”

Officers, after arresting the two buyers, went to the van and arrested the two sellers. “25 baggies of Cocaine were recovered from Lopez and $693.00 was also seized as suspected narcotic’s proceeds,” according to Berdnik.

The four individuals have been charged with various drug offenses. “Gurnari and Lopez were sent to the Paterson Municipal lockup pending first appearance in court,” according to the office. The two buyers were charged and released pending court appearance.

“The Sheriff’s Office will continue to actively investigate and arrest individuals who sell or purchase narcotics in Passaic County,” said Bernik. “For the second time this week Sheriff’s Detectives made arrest based on information supplied by concerned citizens about alleged illegal activity.”