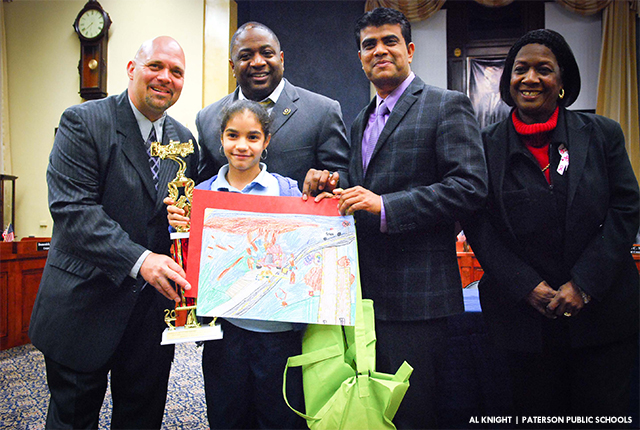 A student from Norman S. Weir School, got out of his seat in the council chamber, walked behind the council chamber’s railing, high-fived the mayor, and accepted a trophy and an award for drawing a poster with a message: fire prevention.

About two dozen students belonging to the Paterson Municipal Youth Guidance Council from various city schools were recognized for their artistic talents put to use in public service announcement posters. “It’s great for the kids,” said Lily Pena, a parent, who said her son won a similar award last year.

The theme for the drawings was fire safety. One poster showed fire and smoke engulfing a bedroom, as a firefighter is attempting to snuff out the blaze using a water hose, and above it read: “Don’t hide. Get outside!” Students from across the district were recognized, some of the schools include: Napier School and Norman S. Weir.

Frank Filippelli, chairman of the council, said, “Today it’s teaching them fire prevention awareness: Don’t hide. Get outside!” The poster’s message, was clearly spreading not just amongst the youth, but also to the adults.

According to one of the organizers the contest has been going on for many decades. “I love this contests, this is one of the best known that Paterson puts out — we always have a great turn out,” said Norman, an art teacher.

Throughout the award Jeffery Jones, the city’s mayor, kept the students from becoming bored by using light humor. “I need you all to look under your seats for an envelope,” said Jones. “Sikes!”

Jones said, the council was teaching young people to become leaders in ensuring the safety of their families, and this award enforced just that. “It wasn’t just a picture, it was a story,” said Jones. “They wrote a story in art, so that if other people saw it they’d know how to survive. And that’s awesome.”