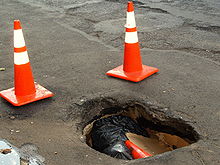 A city woman, who fell and injured herself by stepping on a pothole in Montgomery Street, is set to receive an amount of $27,000 in settlement money from the city.

During Wednesday’s City Council meeting, council members, without discussion, approved a resolution settling the case Latasha Gregory Vs. City of Paterson. Gregory tripped over the pothole in 2009, injuring her neck, back, knee, and shoulder.

When the case was in court, the city’s lawyer maintained that Gregory fell on private property, and therefore, the city ought not to pay anything. However, Gregory’s lawyer argued that the pothole was on the street, far removed from any private property, and the city was liable. And that it had been there for a long time providing the city with ample amount of time to fix it, but it neglected to do so.

Instead of going to trial which would have cost the city more money to see the case through the city’s lawyer determined the “best interest of the City of Paterson to settle this litigation.” A week earlier, during an executive session of the council, the lawyer representing the city came in to brief the council on the case.