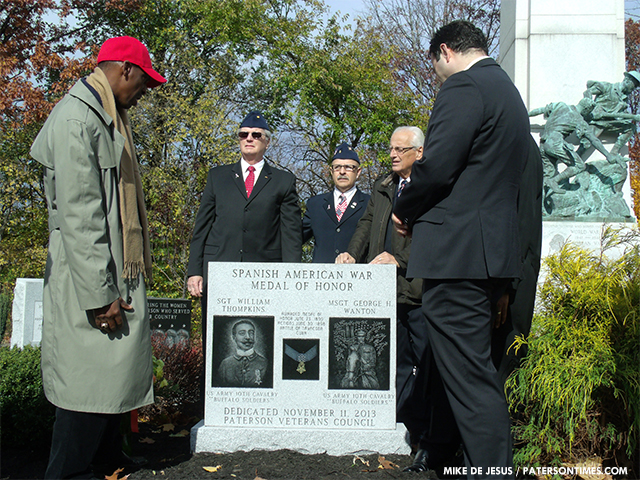 Two soldiers, who served in the Spanish-American War, were honored during a Veterans Day ceremony at the Veterans Memorial Park at Hayden Heights on McBride Avenue by the Paterson Veterans Council.

William Thompkins, a sergeant during the war, and George H. Wanton, a master sergeant, both African-American, served in the 10th Cavalry Regiment of the United States in 1898. Tony Vancheri, the president of the council, read out the deeds of the two men, who fought in the Battle of Tayacoba.

“On June, 30th, 1898, American and Cuban forces aboard the USS Florida, near Tayacoba Bay, Cuba, dispatched a small landing party to provide reconnaissance on Spanish outposts in the area, the party was ambushed by Spanish troops,” said Vancheri. “The men aboard USS Florida launched several rescue attempt.”

It was during the fifth attempt led by Wanton and Thompkins, whose regiment was nicknamed the Buffalo Soldiers, that the men were rescued. “They found and rescued all 16 members of the landing party,” said Vancheri, who read out the exploits of the group.

After his speech sharing the deeds of the two men with a crowd of about 50 people that included political figures and other veterans, Vancheri unveiled a stone plaque with the name and depiction of the two Spanish-American War heroes.

“We hope that the little we do says and represents how much we feel for those who serve,” said Jeffery Jones, the city’s mayor and a veteran himself. “We know we’ll never do enough. We understand that the sacrifices that have been made — you can never say thank you enough.”