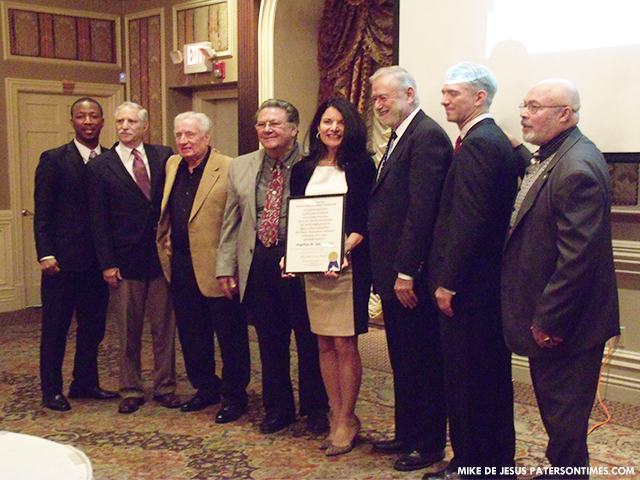 A number of people were honored on Wednesday evening at the Brownstone, during the 16th Annual Historic Preservation Awards, for doing their utmost to preserve and share the history of Paterson.

Angelica Santomauro, who runs the Botto House or the American Labor Museum, received the 2013 Good Graces Award, for her role in promoting a program that showcased to the public the importance of the 1913 Silk Strike. The award is named after Grace George, a vigorous promoter of history in the city under Frank Graves, who organized the Paterson Tour Office, allowing George to provide tours to visitors coming to the Great Falls.

Santomauro, who had interacted with George, recalled an anecdote, saying, during her first meeting with George, she told her, “Angelica, don’t think that your work at the Botto House is going to be easy.” The work might not have been easy, but organizing a program that exhibited to the world the city’s heritage during the 100th anniversary of the silk strike earned her last night’s award.

The youngsters of the Great Falls Youth Corps were recognized for cleaning of the Raceway near McBride Avenue during the scorching summer months. Manuel Martinez, coordinator for the organization, accepted the award, crediting the youth for their effort and accomplishment.

New Jersey Community Development Corporation, which restored the Roger’s Locomotive building near Spruce Street, was acknowledged for restoring a historic building which would have otherwise decayed. Robert Guarasci, the chief executive officer of the corporation, accepted the award.

Pasquale “Pat” Di Ianni, who passed away earlier in the year, was honored for promoting tourism in the city, through the establishment of the Passaic County Board of History and Tourism. Di Ianni testified before the Congress in Washington DC imploring them to designate the Great Falls as a national park.

MadRag, a store in the city’s downtown, which restored a historic building there, was recognized for its accomplishment for integrating history with retail. Michael La Place, director of the county planning board, was recognized for his work in the Morris Canal Greenway Project. Hunter Research Inc, a company that completed the architectural survey of the city’s mills and industrial complexes, was acknowledged for its works. And an award was given to Richard Hunter, an archeologist and president of the company.

Frank Lautenberg, the senator who hailed from the city, was posthumously honored for his role in helping establish the commission, and for being the “biggest champion for Paterson” according to Martin Feitlowitz, chairman of the commission. “We know him as our senator because Frank Lautenberg never forgot Paterson,” said Feitlowitz. The award was accepted by Ellen Lautenberg, his daughter.