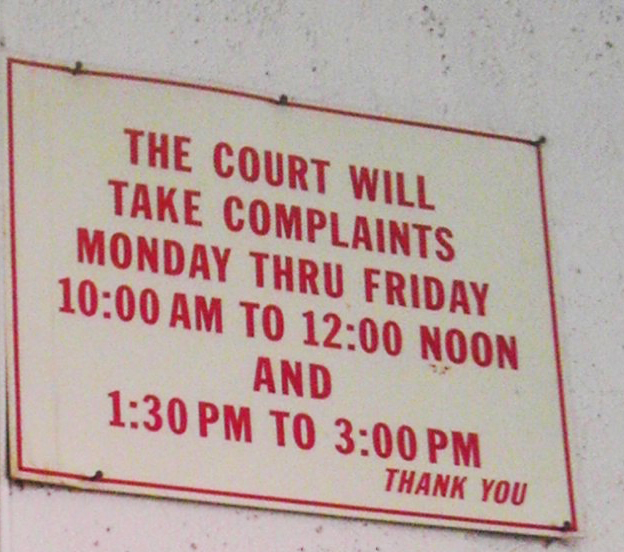 A large sign posted in the second floor lobby of the Paterson Municipal Court reads: The court will take complaints Monday Thur Friday 10:00 AM to 12:00 Noon and 1:30 PM to 3:00 PM.

Except court staff members, clerks sitting behind a glass window in a nearby room, inform residents, who show up after 11:30 a.m. to come back another time. “We take the last one [complaint] at 11:30 a.m.” said Stephanie Gastelo, a court supervisor. “We all gotta go to lunch.”

One man, who did not wished to be named, said he visited the court more than three times and each time he was sold an excuse. Two men, who finally managed to file a complaint on Monday, said they had to “setup appointment” prior to coming in.

Manuel Quiles, court director, did not acknowledge whether the court stops taking complaints 30-minute prior to noon; however, he did note the time this reporter visited the court, and responded: “You were here at 11:50AM not 11:30AM.” He further stated, “You would have not been able to fill out the complaint form in 10 minutes., you were given the option to come back at 1:00PM when we resume taking complaints and that was not good enough for you.” When the supervisors exact words that the court takes the last complaint 30-minute prior to noon was quoted to him through email Quiles was silent.

Quiles’s court complaint hours or the reduction of them doesn’t seem to be good enough for anybody.

“If the sign is posted, without question, it’s unacceptable,” said Jeffrey Jones, the city’s mayor. “If we have a time posted that’s the time I expect it to be honored.”

Jones said, if the court cannot accommodate residents during the advertised complaint hours, it ought to either scheduled alternate lunch for staff members or change the sign. “We advertise it because we obviously thought it was a good thing, and if we find that we can’t accommodate it we should change it,” said Jones.

Charles Thomas, the city’s business administrator, when asked to interpret what the sign means, said it was “obvious” and “plain”; however, when a resident comes in following the obvious and plain sign, and is turned away, because as one court employee put it “we are getting ready for lunch,” than the sign becomes anything but clear.

“The staff is on a tight schedule they must be back on time to continue taking complaints and get the afternoon court sessions going,” said Quiles, in an email response. Messages were left on Quiles’s phone for further comment and clarification – he did not respond to three different voice messages left on his phone.