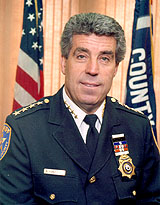 $10,000 reward is being offered to anyone with information leading to the arrest of the shooter who wounded Oneil Peart, an Essex County Sheriff’s Office, according to Armando Fontoura (pictured), that county’s sheriff.

Peart, 37-year-old, was handling security at his family’s liquor store on Straight Street, when a vehicle pulled up, at around 1:05 a.m., according to police, and began firing.

The off-duty officer and a bystander were wounded in the incident; both were rushed to St. Joseph’s Regional Medical Center, where they remain in stable condition.

A city resident, Peart has been working at the Essex County Sheriff’s Department for the past six years. Anyone with any information pertaining to this shooting incident is asked to contact the Major Crimes Unit at 973-321-1120.