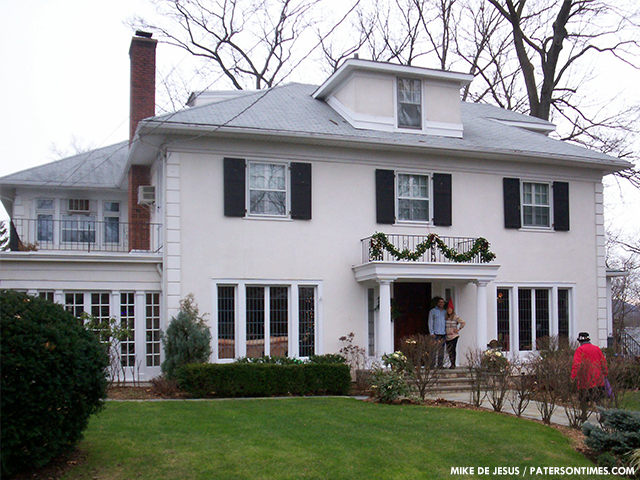 Over 400 people attended a historic homes tour to raise funds for the Eastside Neighborhood Association, during the frigid Sunday afternoon in the city’s eastern quarter.

The tour covered six historic homes in the city’s Manor Section, a part of the city known for ubiquitous mansions which were formerly the residences of prominent Patersonians. “These homes represent what Paterson used to be,” said Robert Parchment, whose East 38th Street home was part of the tour.

Parchment, who shares his home with his wife Emiko, said his home used to be the dwelling of a group of French diplomats, who commuted from the city to New York City to work at the French embassy there. “President Ford attended a dinner party here,” said Emiko. The Parchments French colonial home was built in 1928, and was purchased by them in 1995 from the diplomats. Many of the homes are steeped in history. One home on East Park Drive was built in 1926 for John Hinchcliffe, a mayor of the city.

The cost to take the self-guided tour was $25 per person. “It’s a self-tour, when you get in mostly people talk about the home,” said Christine Conforti, a volunteer. Interested parties came into the White House in Eastside Park, from which they were able to purchase a ticket which had on it the six homes, their addresses, a brief account of each home, and the names of the owners. Outside each home hung balloons with a number attached to them indicating to those who purchased a ticket that this home is one of the ones on the tour list.

Visitors, about 400 of whom came out, according to Michael Donow, a lifelong city resident and a member of the association, did not mind the self-guided tour, though one wished she had brought her GPS to better locate the homes. It is estimated the association raised well over $10,000 from ticket sales.

The money raised by the tour, which has been going on for the past 25-years, will be used to maintain Eastside Park. “Most of the money goes towards park improvements,” said Donow, who pointed to a number of improvements the association had made to the city’s eastern park. Many plaques under statues, which were falling apart, were renovated and made anew by the association. Susan Roche, a resident of Ridgewood, came to the city to take the tour. “I’m really glad they are saving them,” said Roche of the homes.

“A lot of people here take a lot of pride in the homes they own,” said Parchment.