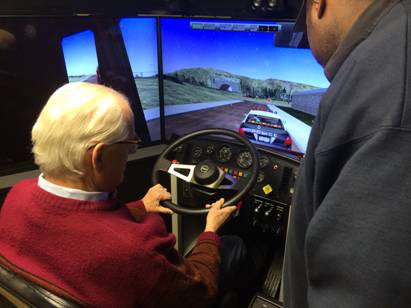 The simulator has three large monitors with a cockpit that is almost a replica of a real fire engine’s driver’s seat. “Software can be uploaded to the simulator to replicate different scenarios, including various emergency situations, weather conditions, traffic patterns, and specific street layouts,” read a description released by the congressman’s office.

“Ensuring the safety of Paterson residents against the dangers of fire starts with providing the community’s firefighters with the equipment they need,” said Pascrell, who got inside one the simulators and gave it a test run. “That’s what the FIRE grants are all about.”

Michael Postorino, the city’s fire chief, expressed his appreciation for the grant and equipment which would have been impossible without the congressman’s help. “This grant money allows our department to be more efficient, better trained, and more equipped,” said Postorino.

The simulators cost around $177,868, and much of that money came from a federal grant issued to the city. “Funding for the training equipment was made possible through a $177,868 federal FIRE Assistance to Firefighters Grant (AFG) awarded by the Department of Homeland Security (DHS),” according to the congressman’s office.

Inside the simulator a firefighter is able to adjust road conditions, add additional hazard, and train under tough circumstances, to better prepare himself for hazardous driving conditions. Simulators shown are often available at fire training schools; however these units, will be located at the fire headquarter on Madison Avenue to train fighters from the city and neighboring towns upon request.

“This state-of-the-art equipment will ensure that our brave first responders have every advantage available to keep the risk of loss of life and property damage at an absolute minimum,” said Pascrell. “The FIRE Act was written here in Northern New Jersey with the purpose of helping communities support their first responders and bolster public safety.”