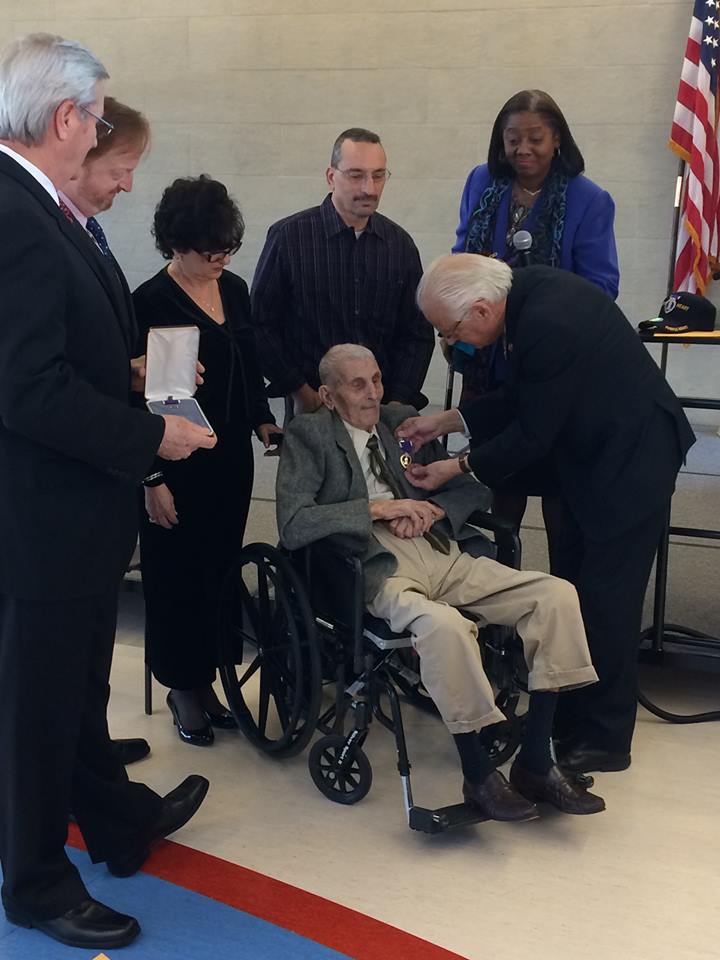 A city veteran who was overlooked for a Medal of Honor after service in World War II due to a clerical error received his Purple Heart today, 70-years later.

John La Puzz, (pictured in wheel chair) a city resident, born and raised in Paterson, signed up to serve in the military in 1940. He was placed in the 363rd Infantry Regiment which was deployed in the European Theater during the Second World War.

On July 29, 1944 La Puzz and his regiment were fighting in the Italian Front, where he was wounded. La Puzz applied for the Medal of Honor, but because of a clerical error he was not given the honor that he deserved.

Years later the family of the wounded veteran reached out to Bill Pascrell, Jr., the congressman representing the 9th Congressional District, and John Harris, a Passaic County Veterans Officer, both of whom worked behind the scenes to look into why La Puzz was overlooked for an honor.

“As a veteran myself, it is an honor to help those who served our nation receive the medals they earned with their distinguished service,” said Pascrell, Friday morning at the Veterans Memorial Home in Paramus, where La Puzz with his family received the belated medal.

“John La Puzz is a distinguished American who waited far too long to receive his Purple Heart and I am proud that our office was able to present this medal to him in the presence of his loved ones,” said the congressman, at today’s ceremony with the family and county Passaic County officials.

“It is easy to see why Congressman Pascrell is a favorite among military Veterans,” commented Bruce James, a county freeholder, who attended the ceremony along with other officials.

“I’ll continue to fight to ensure our nation keeps its promise to the brave men and women that put their lives on the line to protect our freedoms,” said Pascrell, who after seven decades, managed to correct a governmental mistake, that deprived a wounded solider his just desert.