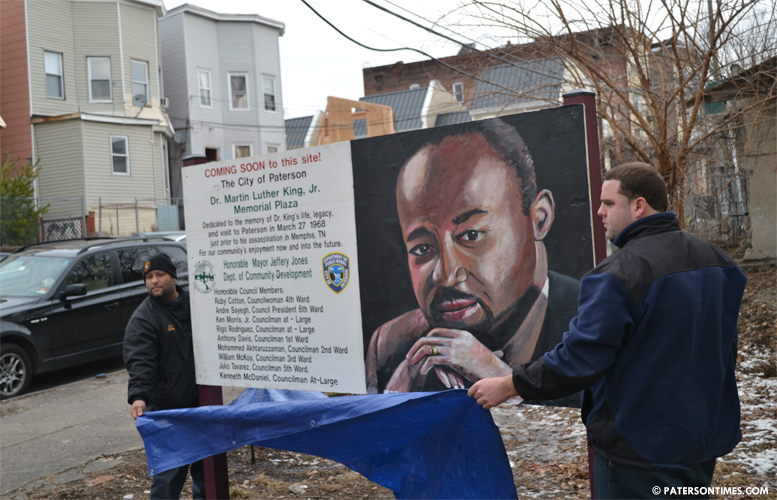 City officials on Monday afternoon unveiled a large sign in the corner of Auburn and Governor Streets in the name of the slain civil rights leader.

Martin Luther King, Jr., after spending more than a decade fighting to obtain basic human rights for African-Americans, visited the city in March 27th, 1968, at the invitation of Russell Graddy. During his visit King made his only stop at the Bethel AME Church located on the corner of Auburn Street, where he delivered a speech. Little is known of the content of his speech.

In honor of that visit the entire street has been additionally named as Freedom Boulevard, recognizing the debt that minorities and blacks owe to King for basic liberties. In front of the church that he visited in 1968, lies a newly vacated piece of lot, where the sign has been erected, promising something great to come.

Jeffery Jones, the city’s mayor; Andre Sayegh, the city’s council president; and other officals were present at the unveiling, each making a small speech recognizing King’s contributions. “A great man of the world,” said Bill Pascrell, Jr., describing the civil rights leader. “It’s not a shopping day, it’s a day to remember where we come from.”

Jones, making a speech inside the church King visited, remarked a “wall” that’s been erected in the city’s 4th Ward separating it for the rest of the town. “There’s been a wall and boundary around the 4th Ward,” said Jones, harkening back to a time when the only place blacks were allowed to live inside the city was in the Fourth Ward.

City leaders have yet to plan out what will be “coming soon” to Martin Luther King, Jr. Memorial Plaza.