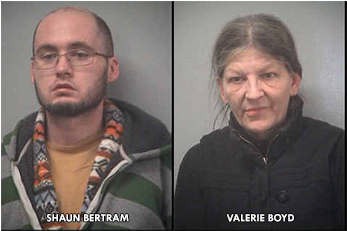 A man and a woman were arrested with 81 packets of heroin earlier today, just steps from School Five, announced Richard Berdnik, the Passaic County Sheriff.

Shaun Bertram, 31, a resident of Butler, and Valerie Boyd, 55, a resident of Pompton Plains, were inside a vehicle that was traveling near Totowa Avenue and Maple Street at 11 a.m. on Friday when a detective spotted Bertram, identifying him as a suspect with an warrant out for his arrest. “Bertram was known to detectives to have an outstanding Warrant for narcotics possession,” read a statement from Berdnik.

The detective with the sheriff’s office pulled over the vehicle and arrested Bertram. “After the vehicle was stopped, detectives placed Bertram under arrest and found him to be in possession of 33 glassine envelopes of Heroin,” according to the sheriff.

When the vehicle was pulled over Boyd begin to tuck at the seat attempting to conceal some of her drugs. “Boyd was placed under arrest and found to be in possession of an additional 48-glassine envelopes of Heroin,” according to the office.

Bertram was transported to the Passaic County Jail on Grand Street. Boyd was processed, and released pending a court appearance in the city’s municipal court.