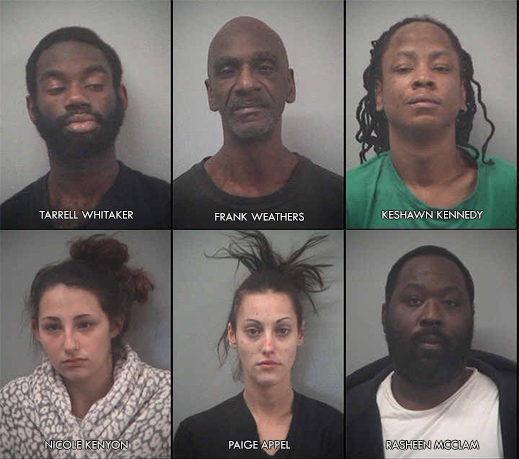 Six people were arrested during a raid at a drug warehouse on Friday, according to the Passaic County Sheriff’s Office.

Officers raided the second floor apartment where detectives found the door was securely bolted to protect the illegal drugs that were inside the home. “Detectives found that the doors to the apartment had been fortified with heavy-duty deadbolts and other locks and there were multiple video surveillance cameras watching the entrances,” read a statement from the sheriff’s office.

After getting passed the fortified door, detectives found two guard dogs inside the apartment. The suspects set one of the dogs after a detective as soon as he managed entry into what authorities call a “drug den.” The officer fired at the dog, and wounded it.

Detective searched through the apartment to find crack cocaine, marijuana, and heroin. “During the search of the apartment, in excess of 1.5 ounces of Crack-Cocaine, a quantity of Marijuana, and Heroin was seized,” according to the office. After seeing officers attempting a raid at the home, the suspects moved to the bathroom and attempted to flush the drugs down the toilet to destroy evidence.

Officers found a loaded Taurus 357 magnum handgun that was reported stolen in North Carolina. $1,406 in cash was confiscated along with the sophisticated video equipment that was used to monitor the home from possible raid. The injured dog was provided treatment. “The injured dog was rendered aid and transported to a veterinarian by the City of Paterson Animal Control Officers,” according to the office.

Kenyon, Kennedy, McClam, and Weathers all had warrants out for their arrest; these four suspects have been retained at the county jail while the others, after being charged, were released.