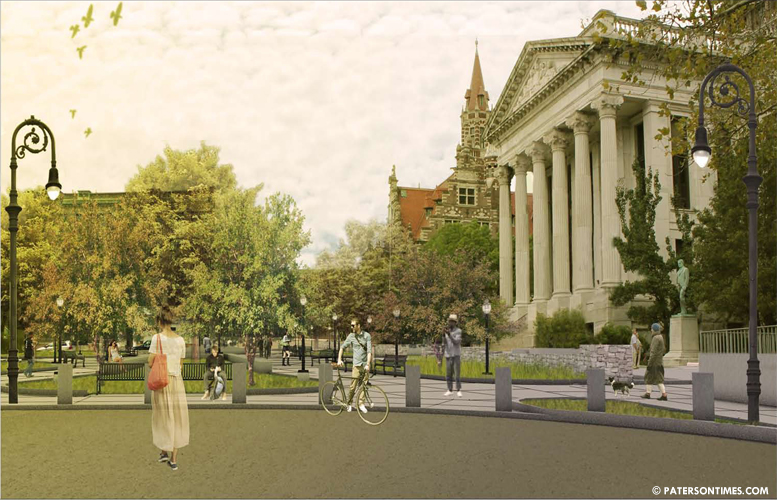 Plans are in the works to re-open the magisterial steps of the Passaic County Court House with a new verdant plaza by closing Hamilton Street.

The county is seeking an easement from the city to close down a block of Hamilton Street to vehicular traffic, only allowing vehicles into the roadway in cases of an emergency, for what it calls a Court House Plaza. “One block area will be closed to vehicular traffic,” said Michael La Place, county’s planning director, during a presentation on Tuesday inside the City Council chamber. Road will be open to fire trucks and police vehicles. “The plaza is designed to allow emergency access to vehicles in case of fire or security,” said La Place.

A map of the plaza showing where Hamilton Street will be upon completion.

The other half of Hamilton Street that connects to Market Street will remain open. Very little traffic passes through the street, according to county officials, making traffic impact as a result of the street closure minimal. “It’s a very lightly trafficked street,” said Charles Silverstein, the county’s traffic engineer. “We did a study there’s only three cars a minute that use that street in the peak time.”

La Place stated the plaza will not only be an asset to the city, but it will solve a practical problem in that section of the city with drainage issues. The plaza will have multiple rain gardens to absorb runoff rain water.

In the center of the plaza — on the map: sculpture element — will be a large relief map of the county, showing topography change over time, with the city at its center. “First we were thinking of a water element,” said La Place, who stated that adding a fountain in the center would require much more maintenance and the seasonal problem with water when the fountain would freeze during the winter.
“We got that idea because there used to be a large map of the county on display in the court house back in the 1930s and 40s,” said La Place. The map will be 10 feet tall on a large slab in the middle of the plaza.

After the plaza is completed the court house steps that have been closed for more than a decade will finally re-open. “Freeholders are working to open that main front of the historic court house entrance that’s locked,” said La Place.

The county, which will pay for the entire project, will do restoration work on the railings prior to opening up the entrance. “We’re going to be restoring the lighting and the railing,” said Michael Lysicatos, planner at the county planning department. The opening up of the entrance will create a new venue in the city for events, said Lysicatos.

Artist rendering of what the plaza will look like after construction is finished at the end of 2014.

The plaza with its shade trees and well maintained lawns will serve as a peaceful environment for jurors and court employees during breaks. “It will provide a place for jurors that come in everyday to the court house complex and the employees to get out of the buildings and to hopefully enjoy a walk around downtown Paterson. And explore some of the shops and eat lunch outside,” said La Place.

County officials have yet to figure out the cost for the plaza; however, an engineering firm has already come up with a design for what the end product will resemble. Officials have yet to open up the bidding process for this project, until then the final cost will not be known. “I really like the idea,” said Kenneth Morris, councilman at-large. “I like it even better the county will pay for it and maintain it.”

Construction at the site will begin this year, and by the end of the year the plaza should be completed, according to officials. “It’s a simple project,” said Lysicatos on Thursday. “We’re hoping to start construction this year.”