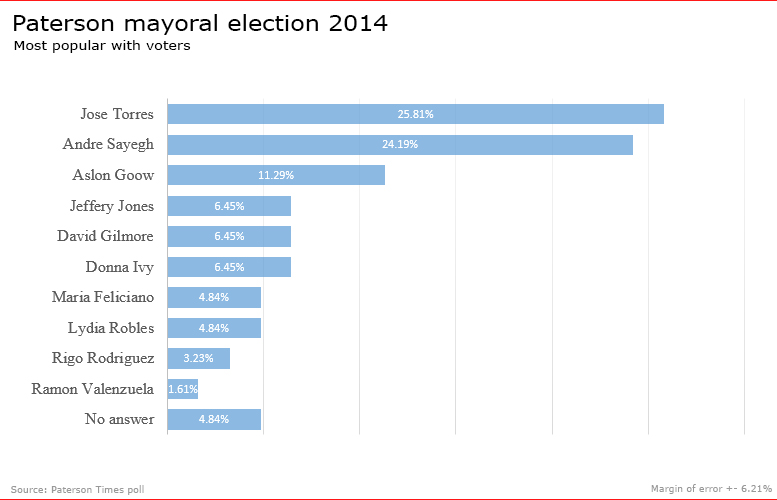 Jose Torres, the city’s former two term mayor, appears to be the leading candidate in the city’s mayoral election to be held less than three months from now, according to a recently completed Paterson Times survey.

Torres is favored by 26-percent of registered voters surveyed in the past month. Close behind the former mayor is Andre Sayegh, president of the City Council, with 24-percent of voters willing to cast a ballot for the 6th Ward councilman.

Third in popularity is Aslon Goow, former 2nd Ward councilman, with 11-percent of voters willing to back him for the executive seat.

Jeffery Jones, the city’s incumbent mayor, who has been mired in controversies throughout his four year reign, came out tied with two other candidates. Jones received the approval of 6-percent of voters, tying himself with David Gilmore, an activist, and Donna Nelson-Ivy, head of the city’s health department.

Political strategists have long held that factionalism in the city’s African-American community would serve no good but divide up the vote and make it difficult for a Black candidate to clutch the mayoralty.

Last month, African-American leaders held a private meeting inside a church on East 22nd Street to reconcile all three candidates, and unify behind the incumbent. However, that effort backfired when a candidate and some members of the African-American community grumbled about the unfair process organized by Benjie Wimberly and Shavonda Sumter, both assemblypersons and influential Black community leaders.

The clear cut distribution of percentages between the three African-American candidates give weight to the predictions of strategists.

Maria Teresa Feliciano, a Hispanic leader, who is most known for wanting to curve out a separate Dominican ward in the city, received the support of 5-percent of voters. Lydia Robles, another activist, who is known for cleaning up parks and painting over graffiti infested buildings, received the backing of 5-percent of registered voters.

Like the city’s African-American community, the Dominican community attempted to heal its divisions by rallying around a single candidate through a systematic vetting process organized by the Paterson Dominican Council. However, that effort came to naught when the council picked Feliciano snubbing Rodriguez.

Rodriguez complained the process was unfair and would not abide by the decisions orchestrated by the council.

Monther Harb, an Arab community leader, joined the race late, excluding himself from this survey.

The poll surveyed 248 registered city voters and was conducted from January 15th to February 15th, 2014 and has a margin of error of plus or minus 6.21 percentage points.